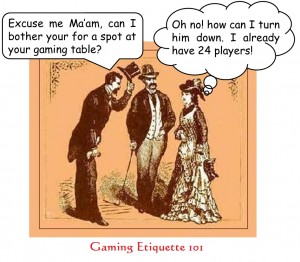 It seems like gaming dry spells are contagious. Well I can identify the reason for mine. Last week Puerto Rico (where I live in case you did not know) was under Tropical Storm watch and on top of that I had to finish an important paper for school so I had to cancel the game. This week I’m recovering from a nasty fall a couple of days ago (you’d know of this is you followed me on Twitter!) and cannot bear to sit for too long. I’ve decided to listen to the Medical Doctor and rest a few more days, which means no game this week either. Two weeks is too long to miss a game, especially in a campaign’s last leg. I am concerned with fatigue and losing momentum, but I have plans to address that. That’s not the topic of this post…

What do I mean by Gaming Etiquette? Well we all know role playing games are a social exercise. Part of the fun is spending time with our friends and engaging in the fun and banter that comes with that. But as in any social situation there will be many different personalities  and certainly personality clashes in the game and part of being a good player and game master is being respectful to our fellow gamers. Whether it’s a casual game, a new group, or one that’s been together for a long time, there will always be differences. I will like to enunciate on this topic, today specifically about scheduling, attendance and canceling game sessions.

I am a firm believer in consistency (yes I’ve said it before but bear with me for a moment). A successful game is one that gets together on a regular basis. If you consistently play every week, or every other week, or every sixth full moon, whatever your schedule, people will realize the game is a serious commitments and give it the necessary importance. Those who can’t will leave the game, those who can, will stick around.

In many ways this falls on the GM (or GMs) hands because in most traditional games the Game Master is integral to the game actually happening. I am in no way proposing you be a dick about it! Be mindful of people’s schedules, you can accommodate, but if every week there is an excuse not to game, the game will fall by the way side.

These days I’m using various methods to schedule the game. I keep a Google Calendar with gaming dates, I post in the Facebook Groups dedicated to the campaigns and text message game reminders (or cancellations as the case may be) typically two days before the game. I try to let players know in advance if there are cancelations or rescheduling. When I have to travel abroad or work extra hours, and know in advance, I try to let them know the week before. In instances where work, or classes, or health make it last minute I try (as often as I can) to at least let them know before noon. That way, players can make plans. Does it always happen? No… Whenever I can I call them and let them know personally.

Don’t just disappear and not show up to the game. Don’t hide and refuse to answer the phone. That’s rude and makes others feel you are dismissing them. If you are a player and can’t make it, tell the GM, that way he or she can plan accordingly, and shows you appreciate the time other dedicate to the game.

Things will happen, even the best laid plans go awry, and more often than not players will be absent from the game. If this is a critical problem where a player only shows up for one out of every ten sessions, maybe it’s time to have a talk. If schedules are complicated it may be time for that player to take a break, his or her character will go away until the player can return to the game.

I don’t typically cancel games if players are absent. I know people who cancel if more than half of the group is absent, and everybody should determine what their standard is going to be. If the game is scheduled and some people show up I would rather play. True it may require a reworking of the plans for the game, but my style of game mastering typically allows me some wiggle room. If your style is more structured perhaps you would need to reschedule. It will be different for each group.

I think my players trust me enough to know I will not wantonly destroy their characters if they miss the game. The player, if feasible, will not be in the adventure, or if the character cannot disappear then he or she will be in the background. That trust is developed as you game together and not everybody is comfortable with this. Make sure you discuss with your group and make sure to be respectful of others.

One mistake I’ve made in the past is continuing the game once the game session is over. If I miss a scheduled game I know it was on me, but if the GM suddenly continues playing with other players because they work together, are roommates, or see each other more often than other members of the group, then I mind. I feel like I was kept outside the loop of the game and those player are getting an advantage over me. I know it’s not a competitive game, but I feel it’s unfair.

Like I said, I have been guilty of doing it, and it’s happened to me, so I try my hardest to avoid it. Of course you can use other methods of communication, be it e-mail, chat, social media. Just make sure all players are offered the opportunity to participate. Maybe not all will do, but at least keep them abreast of what the other are doing.

That’s my initial advice on gaming etiquette. Respect your fellow gamers’ schedule. Communicate not only expectations, but about game planning in general. Keep the game going, don’t be discouraged if you invite 5 people and at first only 2 players show up regularly. Stick to it and eventually more people willing to commit to the game will come.

Hope the advice is useful… Remember this is just my opinion, I may be wrong. Are you at all interested in this topic? Would you like me to write about gaming etiquette again? Let me know…