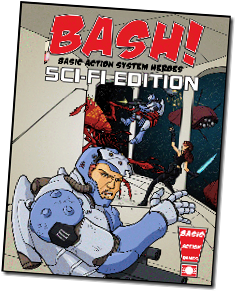 In my search for a roleplaying game system that I can use for that Perry Rhodan game that I have planned for ages now I stumbled upon Basic Action Games’ BASH! Sci-Fi Edition. Back in the day when I first heard about BASH (I think it was in one of the podcasts I listened to back in the day) I picked up BASH! and BASH! Sci-Fi Edition at RPGNow but never did anything with it. When looking for a rules system able to handle the extreme characters of a Perry Rhodan game, I quickly realized the best way was to look at superhero games. At first I thought about using Savage Worlds in conjunction with the Super Powers Toolkit, but then I remembered BASH! Sci-Fi.

BASH! Sci-Fi Edition is a 138-paged softcover book or PDF that contains all the rules needed to run SF games of every subgenre using the BASH! system. BASH! was originally a superhero game that the author Chris Rutkowsky designed in order to teach math to kids. If this sounds horrifying to you, don’t fret. We’re talking about basic multiplication here.

Whenever your character wants to perform a task in a conflict situation or when there’s a chance it might fail in a way that affects the story, you roll 2d6 and multiply the result with the relevant stat. The result must be higher than a set difficulty number to succeed. Skills are usually not rated but either you have a skill or you don’t. If you try to use a skill the character is not trained in, the 2d6 roll is modified by 4. The three stats (Brawn, Agility, and Mind) are usually rated from 1 to 5 where 1 is the human norm. To give the underdog some better chances, rolling doubles allows you to reroll and add one die (and another one, if you roll the same number again), and heroes always win in a tie.

Character creation consists of distribution a number of points between the three stats and picking from a list of powers. The book contains both mundane powers and also special powers that can be chosen by Psychics, Aliens or Android/Cyborg characters. Apropos aliens: the game contains a couple of premade aliens and gives the GM some guidelines on how to create his own. In my opinion the character creation is one of the many strengths of the system. Creating a SF character is fast, easy and allows a wide range of different characters. The appendix also contains some guidelines on how to transfer character to and from the superhero edition of BASH! and how to create characters with stats higher than 5.

The combat system is pretty standard. You determine initiative (called Priority here), attack rolls are stat contests (Agility vs. Agility for physical combat, Mind vs. Mind for mental combat). Damage caused by weapons is determined by a roll of 2d6 times the character’s Brawn or Mind (Brawn in hand-to-hand combat, Mind in ranged combat) plus any weapon modifiers. The amount of damage taken is then subtracted from the character’s hitpoints. What I like a lot is that every player character has the same amount of hitpoints, but how much he or she is affected by the damage is dependent on Brawn. Character with high Brawn can just ignore the pain better than those with low Brawn.

What I don’t like about the combat system is that it uses “squares” not feet or meters. This may make a lot of sense for people who love to use battlemats and miniatures, but I would have preferred to have ranges in meters (or at least feet). The game also uses a couple of non-standard terms for initiative, round, turn etc. A single game session is called an “issue”. A combat round is a “page” and a character’s turn is called a “panel”. I can see why the author chose those terms for BASH! but I would have preferred more standard nomenclature.

Since BASH! Sci-Fi is meant for SF settings, there are extensive (but not complex) rules for vehicles, including spaceships, and mass combat. The equipment lists for characters and vehicles are pretty extensive and generic enough so that you can easily adapt the game to almost every setting imaginable.

Apropos settings: BASH! comes with guidelines on how to run games in the various SF subgenres like Victorian SF, Space Pulp, Space Opera, Hard-SF, Cyberpunk, Giant Mecha, Time Travel and Post-Apoc. Each section contains examples for gear appropriate for the setting and optional rules or powers that could come in handy.

So what did I forget to mention? The game contains a plethora of pregenerated NPCs, monsters and aliens you can use for your game. Because of the rules-light nature of the game, modifying these NPCs to suit your needs should be extremely easy. The artwork used in the book is mainly stock art you may have seen in other products already but is of pretty good quality. The layout is nothing too fancy but clean and has a good readability. If you buy the PDF version, you also get a printer-friendly edition. Last but not least there is a very extensive index which is always a plus!

Overall BASH! Sci-Fi is a very interesting rules-light SF game that still shows its superhero game roots. But that’s a good thing, especially if you plan to run games with larger-than-life characters and cinematic action. If you prefer your games to be rules-light it’s definitely worth a look.

BASH! Sci-Fi Edition is available as PDF from RPGNow or as a softcover version from Lulu.