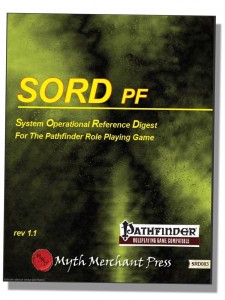 Some days ago I wrote about game master screens and readers correctly pointed out that even if I don’t use a traditional screen, when I use my laptop in the game the computer serves the same purpose as the screen. Think of it as my electronic game master screen! Behind this screen I keep my campaign notes on Excel, PDF copies of several documents, maps and the Pathfinder SRD. Now I have a new toy for this motley collection of tools, the crowning jewel, SORD.

SORD stands for System Operational Reference Document, a tool for the Pathfinder RPG. This is not your brother’s SRD; it’s not an SRD at all. It is an extensively hyperlinked summary of essential rules, mostly presented in just one page per relevant topic.

While the promotion from Myth Merchant Press emphasizes that SORD will speed up your combat (and it will), it does so much more. SORD clarifies rules, summarizes long or difficult rules and references weapons stats and features, skills and other details that frequently require looking it up in the book.

SORD should reduce looking up rules in the book, except in the case of spell descriptions. The document works excellent as a print out, I had the previous version by Myth Merchant Press for the Pathfinder Beta rules and my players made great use of it. But where the document really shines is in electronic format, keywords and concepts are hyperlinked and the document makes extensive us of layers that allow you to turn things on and off, such as page references to the rulebook.

This past week was my first session using SORD in the game, I’ve been using the online Pathfinder SRD extensively, but this week I looked up rules in the SORD and only referenced the SRD for monsters and spells.

I love my SORD; count me as a happy customer!