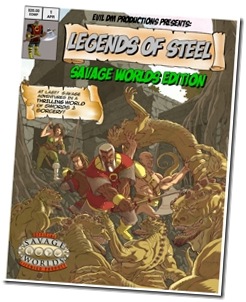 There are campaign settings for Savage World for almost every genre. One genre I’ve been missing for some time was Swords & Sorcery. But luckily Jeff Mejia aka EvilDM released Legends of Steel in a Savage Worlds edition some time ago. I recently had the chance to check it out as he now sells his works on DriveThruRPG now.

The 70-paged PDF is truely a great introduction into the Swords & Sorcery genre. Starting with the Introduction the author gives several examples what Sword & Sorcery is all about and clear up a couple of misconceptions. There are much more character concepts than barbarian and not every S&S game should be reminiscent of Robert E. Howard’s Conan stories.

Mejia differentiates between the “Grim And Gritty”, “Pulp and Paperback” and “Comic book and Cartoon” styles and provides some details and examples for each style. The included campaign setting “The World of Erisa” was modeled after the “Comic book and cartoon” style.

The cover artwork of Legends of Steel is reminiscent of a S&S comic cover and shows a party of adventurers fighting some kind of lizardmen. The interior artwork is black and white only and of  varying quality. But overall the artwork is of pretty good quality. If you buy the digital edition of the book you not only get the regular version, but also a printer-friendly one (which doesn’t contain any artwork) and a high quality version of the map of Erisa.

The character creation section of the book provides tips on how to create interesting characters fitting for the genre and explains what sets Legends of Steel apart from other fantasy Savage World games. For example is the game geared toward human characters and player characters should start as Veterans and not Novices as in vanilla Savage Worlds. This actually sets the tone of the whole campaign. Player characters in the S&S genre tend to be larger-than-life heroes and non-human usually don’t play a large role.

Legends of Steel introduces a couple new and enhanced edges like Birthright, Fearless, Sexy Armor (I am not kidding) and Shape-shifter. Sexy Armor is actually a great idea on behalf of the author. One of the tropes of S&S are horribly underarmored heroes and heroines, but for some reason their loin cloth or chainmail bikini protects its wearer as good as plate. This is simulated in the game by this new edge.

The book also gives a lot of useful advice for players and GMs on how to set the tone of the campaign. There’s even a section on taverns – just think of the tavern scenes in the Conan: The Barbarian movie. All in all I like that the author really managed to convey the feel of the genre.

The second and larger part of the book focuses on Erisa, the campaign world of Legends of Steel. Each place of interest is described in detail. In most cases  strengths, weaknesses, opportunities and threats to the city or province is given. Basically the whole chapter is crammed full of adventure hooks that the GM just needs to pick and choose for his campaign. This definitely compensates for the lack of a plot point campaign. The setting definitely reminds me of the Hyborean Age presented in the Conan stories, but this isn’t a bad thing. It’s crammed full of interesting ideas and there’s the right place for almost any adventure conceivable.

The book concludes with an introductory adventure and a couple of pregenarated characters.

If you are into the Swords & Sorcery genre, you will definitely enjoy Legends of Steel. The Savage Worlds ruleset definitely is a good fit and the book contains a lot of great tips for players and GMs. Did I tell you that the whole book in its digital form is just $12? So you really get a lot of great content for the buck. There’s only a minor drawback: instead of most Savage World campaign settings, it doesn’t come with a plot point campaign. But that shouldn’t prevent you from checking it out!

This review was written based on a read through of the PDF version of Legend of Steel which has been provided as a review copy by the author. Thanks, Jeff!