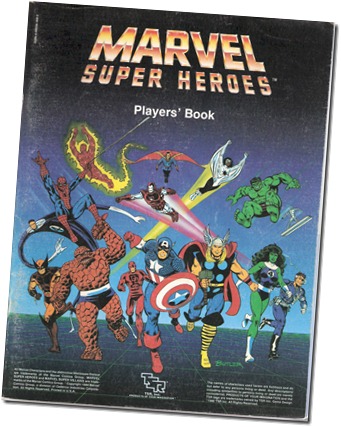 Recently the interest in superhero RPG is rising again. The recent release of ICONS made a lot of gamer extremely happy, DC and Green Ronin cooperate to bring us DC Adventures, there will be a 3rd edition of Mutants & Masterminds and BASH! Ultimate Edition just got nominated for the ENnies. And that’s just the tip of the iceberg.

One of the all-time classic super hero roleplaying games is definitely TSR’s Marvel Superheroes which is also known as the “FASERIP system”. The basic edition was released back in 1984, an expanded edition followed just two years later. As fellow RPG blogger Greywulf has shown in several of his posts, it’s pretty easy to convert characters from Marvel Superheroes to ICONS (and probably other modern superhero games as well). So it caan be used as a great resource for characters if you are into the Marvel Universe.

But it’s also a classic and now freely available roleplaying game. The site Classic Marvel Forever hosts a complete collection of both the basic and expanded edition of Marvel Super Heroes including rulebooks, adventures and sourcebooks. If you are into old-school superhero gaming, you should check this site out!

I have to admit I never played that classic game, but I am very interested in reading about your experiences with it.