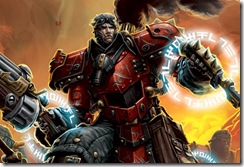 When I first read about this, I thought “Hell, it’s about time!”. The Iron Kingdoms campaign setting is still one of my favorite setting, and it was a shame that most books haven’t been available for quite some time. Since I own all IK RPG books but the Monsternomicon II, I haven’t bought any of the PDFs yet, but I am pretty sure they just removed all references to the d20 System License and released it fully under the OGL.

The books are available from RPGNow and Paizo and are still a bit too expensive for my taste, but at least they are available after all.

I still would like to see a new IK RPG line probably using the Pathfinder RPG, Fantasy Craft or Savage Worlds rules, but it seems Privateer Press is recently focusing on their miniature games, which is really a shame in my opinion. Hmm, I think I should stop moaning and be happy that the IK RPG books are finally available again. Thanks, Privateer Press!

THEY are out there!