Andrew Mordo, also known as Corvus, fellow contributor to this blog and all around nice guy put together a little gem called Dark Sun Microlite. He’s our resident Microlite expert but I’ll take a stab at doing a review of his work.

Corvus is not alone in his love for Microlite, a rules light version of the D20 system that retains many of the familiar elements, in fact the feel and tone of the game is intact, while offering a simplified gaming experience, reminiscent of the D&D of old. There is a lot of community support beyond the core rules and Dark Sun Microlite is one such project.

Personally I have been using Microlite20 and some additional bells and whistles to run a successful Play by Post game in a Facebook group for seven months. It is similar to what we all are accustomed to play ( we are al D&D savvy) but simple enough to work well in the game format which is very different form face to face gaming. I must say Microlite has thus far proved to be a fairly solid system. 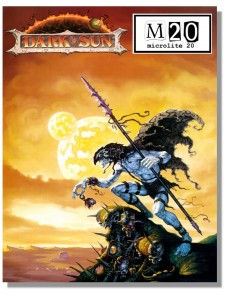 That is why I’m so thrilled with the Dark Sun adaptation. Dark Sun is one of those beloved settings published by TSR that has survived new editions and is now making a comeback for D&D 4th edition. But despite all the love, not everyone wants to play in Athas using the 4th edition rule system. I say to them, here is a perfectly good alternative!

Dark Sun Microlite is NOT a game unto itself, it says so right there on the first page, you need some of the source material to get a feel for the world. What this concise six page document offers is the nuts and bolts to play there. Dark Sun Microlite references three other Microlite20 documents, the basic rules, the Microlite20 Expert rules and Microlite20 Psionics. All of which (and more) that you can download in a budle here!

Using 5d4 to generate characters and starting at 3rd level immediately reminded me of the Dark Sun back in the AD&D 2nd edition days and evocated that feeling so much that I almost expected to read about character trees next! The additional races seem appropriate. I was a little concerned at the Half Giant’s +4 Strength; thinking it may make them unstoppable melee machines, but well they are HALF-GIATNS they are supposed to be tough.

The minor tweaks to the classes are nicely done and I particularly liked the way the rules handled defiling. Simple and flavorful without being needlessly complicated, keeping with the tone of Microlite. The new and modified spell lists are well used to differentiate the classes and realities of the campaign setting. Likewise the multi classing rules really needed for this setting, work well with Microlite in general and they just got added to my regular Microlite campaign.

The rules for new materials are likewise elegant, simple and appropriate. I loved that he resisted the urge to create new stats for the exotic weapons and simple identified existing equivalents. The bestiary is nicely done with a good variety of monsters, but you will need to reference previously published books or magazines just to know what some of these creatures are. The document finishes with a good list of recommended materials you can use to flesh out the rules.

I am not familiar with the new version of Dark Sun being published by Wizards of the Coast, but on my next visit to Athas, I know I’m going there the Microlite way. Unfortunately, I’ll end up in the slave pits!