Recently I learned about the awesome post-apocalyptic roleplaying game Atomic Highway by reading Berin Kinsman’s review. While he’s not really into the genre, he really like the games’ mechanics and toolbox approach. I wanted to run a post-apocalyptic game for a long time, so I decided to get a copy of the game. And I haven’t regretted this decision once, not even for a second!

Instead of writing a full-blown review I just want to share some of my excitement for that game with you. The underlying rules system called V6 Engine is something I wished I had invented. Basically you roll pools of six-sided dice. Each result of 6 is a success, but you can distribute your skill levels among dice to “push” them to 6. The number of dice rolled is determined by the attribute used for the test. This is as easy as it’s brilliant. 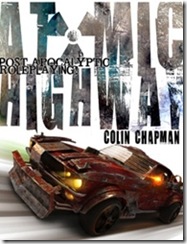 What I really liked about Radioactive Ape Designs’ game is that while there’s an assumed setting, you are meant to create your own version of the apocalypse.  You want a Mad-Max-style with road warriors fighting each others in pimped up cars, dune buggy, or busses? The rules are in the game! You prefer a more wacky approach to the genre with intelligent animals like in Gamma World? It’s in the game. You love the Fallout computer game series and you want to run a pen & paper game based on it? With some work on the GMs part, even this is no problem at all.

The rules are easy enough that you can mess around with stuff without having to fear to break things all the time. Weapons, armor and other equipment in the game is pretty generic, but that’s no issue for me. And given the rules-light nature of the system it would have been a bit odd to have dozens of highly detailed weapon stats. Some types of weapons are missing, but again, it should be easy for the GM to make some new weapon categories up on the spot. 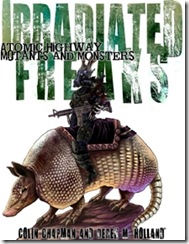 And the supplement Irradiated Freaks really turns things up to eleven! You get new options for mutations, new monsters, new psychic abilities and more. After reading both books I had numerous ideas for different post-apocalyptic games I could run with Atomic Highway. My favorite so far is a setting inspired by the aforementioned Fallout series and a few other sources. Of course you could pull something off with a game like Savage Worlds or the Cortex System, but IMHO Atomic Highway is so perfectly suited for the job, that it would be a shame to use anything else.

Now I only have to convince my group of players that they want to play this game. And especially my girlfriend is not really a fan of the genre…

By the way, Atomic Highway has been nominated in the “Best Rules” category for the ENnie Awards 2010. I voted for it!

Ask The Stargazer: “What is the one RPG that you have never run, but have always wanted to?”