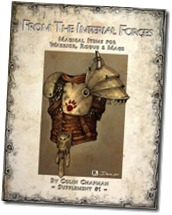 The first supplement for WR&M has been released earlier today. Colin Chapman, known for his post-apocalyptic roleplaying game Atomic Highway, has created more than 20 unique magical items that can be used in “The Fallen Imperium of Vaneria” or in any other fantasy campaign. From the Imperial Forges can be downloaded for free at DriveThruRPG.

Please check it out, and let me know what you think!