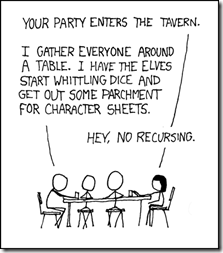 Back in the day, when we were still young and had too much time on our hands, we played in long campaigns, sometimes even spanning years. But in recent years I haven’t finished any campaign properly. Either we lost interest in the game or the group dissolved before the campaign has reached a satisfactory conclusion.

Don’t get me wrong, we still have a lot of fun, but as a GM I still feel I should try to bring a campaign to a proper end. But I am actually my own worst enemy here, because I love to try out new things. One of the reasons why we haven’t finished any campaign properly was because of me convincing my players to try something new while we haven’t finished the old campaign first.

So I finally sat down and pondered the whole situation. After some consideration, I think the best is to just quit all half-finished campaigns for good. After that I want to start something new. Instead of starting an epic campaign or just another one-shot, I’ll prepare a mini-campaign that should last for a couple of sessions. I am not sure how many sessions are actually needed, but perhaps some of you has some sound advice. This way, we can relatively easy try out new things but still get to finish a story arc.

I really hope this might be a way to make things even more enjoyable for me and my roleplaying buddies, but I am not sure if this really works. I think I’ll just have to give it a try.