I still have very fond memories of the Lone Wolf game books I lent from my friend Sven back when we were still in school. The Lone Wolf books focus on the world of Magnamund, where  the forces of good and evil fighting over control. The protagonist is Lone Wolf, the last member of the Kai Lords, a caste of warrior monks. Since it’s a game book the player is in control of Lone Wolf’s actions. That is you can regularly make decisions on what to do, which changes the story and the outcome of the book.

The system (if you would call it such) was extremely easy and involved rolls with a d10 to determine if certain actions were successful or not. Most players probably used the Random Number Table provided in the book to generate random number, but you could also easily use a ten-sided die to do the same.

Recently Mongoose Publishing has released a game that surprised me a lot. It’s called “Lone Wolf Multiplayer Game Book” and is written by Matthew Sprange and Joe Dever, author of the original game books. The 114-paged book is a true pen & paper roleplaying game using the simple rules from the game book for tabletop gaming. Although this sounds like a crackpot idea at first, especially new players and fans of rules-lite systems will love it.

As in the original game book series, you play one of the Kai Lords. Each character has a Combat Skill and Endurance value which are used in combat, a couple of Kai Disciplines (like “Mind over Matter”, “Animal Kinship”, or Weaponskill), up to two weapons and up to eight miscellaneous items and that’s it. As I mentioned before, the system is as barebones as it gets.

In combat the combat skills of your character and your opponent are compared and you roll on the Combat Ratio chart to determine how many Endurance you and your opponent lose. Doing other tests usually involves rolling a d10, is your roll result higher than a set Difficulty by the GM you succeed.

The Gamemaster section of the book does a good job explaining what a GM does and also contains a list of monsters for the players to fight. The book also contains a quite detailed description of the history of Magnamund, and some details about the world including a map. The background definitely isn’t as deep and complex as many other campaign settings, but especially if you loved the game books back in the day, you probably won’t mind. I have to admit I picked up that game mainly because I had nostalgic feelings toward the series.

The layout is clean although I would have preferred a more classic two-columned layout. Both cover artwork and the interior illustrations are of a good quality although not really overwhelming. The look reminded me a lot of the game books itself and I am sure this was intended.

All in all the Lone Wolf Multiplayer Game Book is an interesting game which should appeal to most fans of the original series and people who want to give roleplaying a try without having to bother with complex rules. The book contains everything players and GMs need to run a game set into the world of Magnamund although only Kai Lord characters are playable using the core book. 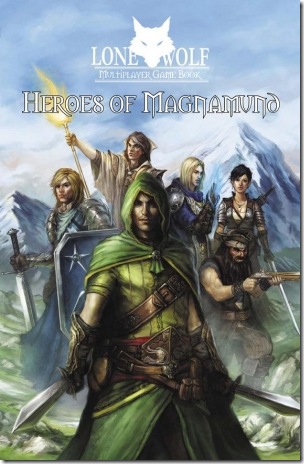 Here’s where the supplement “Heroes of Magnamund” comes into play. The 148-paged book introduces a couple of new character classes including the Border Ranger of the North, the Dwarven Gunner of Bor or the Knight of the White Mountain.

Every class has a list of special abilities much like the Kai Disciplines, get’s to choose from several sets of starting equipment and comes with several pages of description of the class. The book also provides a character sheet for every class. The new classes add a lot of depth to the game and the world without adding too many new rules. The list of classes is also varied enough, so that everyone should find a character he wants to play.

Even if you are not interested in using the rules provided in the Lone Wolf Multiplayer Game Book you can easily use the information in those two books to run a Magnamund campaign in the game of your choice. I am sure a Savage Worlds conversion for example should be very easy to do.

Together with the supplement Heroes of Magnamund, the Lone Wolf Multiplayer Game Book is a valid alternative to other rules-lite fantasy games. Especially if you’re a fan of the original game book series, you should give this game a chance. You won’t be disappointed. Both books are available in print and as digital downloads. The PDFs set you back $11.99 each and are available from DriveThruRPG.

Please note that this review is based on reading through the PDF versions of the both books. My copy of Heroes of Magnamund has been provided by the publisher.

Fantasy Craft Giveaway: We have a winner!