I received and early copy of the Dungeons & Dragons 4th Edition Red Box Fantasy Roleplaying Game Starter Set last week. It’s the first product to be released from the 4th edition Essentials product line. I have already posted an unboxing video, but now that I have spent a couple of days with the Red Box it’s time to let you know what I think.

First off I want to talk a moment about the Essentials product line. Dungeons & Dragons essentials products are people new to role playing games and new to D&D. With simplified Character creation that works with all aspects of 4th Edition Dungeons & Dragons its the right choice. I also feel it’s a great choice for people like me. People who DM more games than they play and struggle over character creation as a result. Being able to quickly build a character and join a game is worth it’s weight in gold to me. 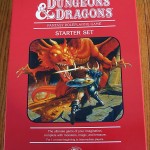 THE RED BOX
The Red Box is beautiful to look at. The pictures I have seen on-line do not do it justice. The front of the box features art work by Larry Elmore that first appeared on the 1983 version of the Red Box and the Dungeons & Dragons Logo uses the same retro font as well. It’s very inviting and just begs to be open when you’re looking at it. As your eye wonders down from the art you read ‘The Ultimate game of your imagination, complete with monsters, magic, and treasure. For 1 or more beginning to intermediate players”.

The sides of the box all say ‘Dungeons & Dragons Fantasy Roleplaying Game’ in the retro font. The back of the box shows a picture of what is inside. A quick glance and you can see that the Character Sheet has been changed and the monster tokens have different monsters on them than the tokens that came with the original 4th Edition starter set. “Your First Step on the Road to Adventure” is written in big red font on the back followed by: 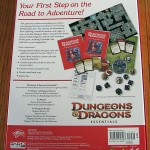 This game box contains everything you need to start playing the Dungeons & Dragons Fantasy Roleplaying Game. You can play an adventurous hero exploring a world of monsters and magic, or you can be the Dungeon Master who presents heroic quests, builds dungeons, and runs the monsters, In this game, anything is possible-the only limit is your imagination!

The back of the box also mentions other 4th edition essentials products that will be coming out in the months to come. 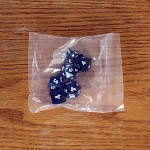 DICE
After opening up the Red Box the first thing I pulled out was a bagged set of opaque, white-inked black polyhedral dice. Unlike the multi colored dice that came in the original 4th edition starter set these dice are all the same color. The numbers are well inked and the two contrasting colors make the numbers very easy to read. Having dice that are easy to read will make the game move along faster. I think these dice where a good call by Wizards of the Coast.

YOUR NEXT QUEST AWAITS
Under the dice was a ‘Your Next Quest Awaits” card. It contains a link with a redemption code to download your next adventure for free. I have tried the link but it currently does not work. The card does say that the link will be active from September 7, 2010 until December 31, 2011. 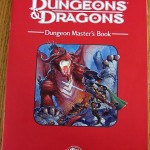 PLAYER’S BOOK
Next in the box is the Dungeons & Dragons Player Book declaring “Read This First!”. The red stabled 32 page paper back book feels sturdy in your hands. This thing is not going to fall apart anytime soon. The art on the Player’s Book is also wonderful. It’s an updated version of Larry Elmore peace on the box. 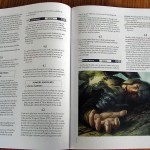 The art and writing inside the Players Book has been done extremely well. It’s all sharp and clear. Pictures of your possible character and monsters along with images showing you how to fill in the new Character sheet are throughout the whole book.

This book wastes no time in getting you started playing a game. It’s setup a lot like a Choose Your Own Adventure. You’re building your character out on your character sheet while fighting goblins. Your standard races of Elf, Dwarf, Human, Halfling and your standard classes of Fighter, Wizard, Rogue, and Cleric are all options to choose from. By the end of the solo adventure you have a flushed out level 1 character. Building my Character took less than 30 minutes. 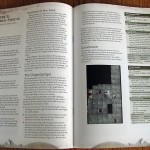 DUNGEON MASTER’S BOOK
Featuring the same cover art as the Player’s Handbook, the Dungeon Master’s book is 64 pages long. It feels just as strong as the Players Handbook and the art work throughout is just as impressive. The Dungeon Master’s book explains more of the rules and continues on with the adventure started from the player’s book and assumes at this point you have other adventures with you.

There are several quests in the Dungeon Master’s book that will take characters just shy of level 3. The book also contains the stats of several additional monsters and helps  walks the dungeon master though creating his or her own adventure. But level 2 is as high as you can go. You will need to purchase the other Players Essential books to level up past level 2. 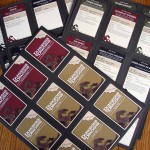 POWER CARDS
After the DM book you will find 7 sheets of power cards. Each sheet has 9 cards that can be easily popped out. At-Will, Encounter and Daily power cards are all here. The cards look great.

This is however is where my enthusiasm for the Red Box dipped a bit. The power cards are printed on very thin card stock as you can see from my unboxing video. Wizards of the Coast makes the Magic the Gathering card game. This company knows how to make playing cards right, but the card stock they used for the power cards are just a let down. Worse yet, the power cards are not repeated anywhere else in the Red Box. So if you lose your power cards that’s it. I had read that the Red Box contained power cards before, but I just expected the powers to also be listed in the player’s book so people would be able to write them down on index cards. 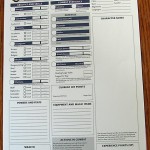 CHARACTER SHEET
The Red Box contains 4 copies of a new simplified character sheet. This I was happy to see. I don’t play Dungeons & Dragons anywhere near to how much I DM it. When I do play it I dread creating my player character. For me it is the most difficult part of playing Dungeons & Dragons. All my friends tell me this is just because I don’t play as much as I DM. If I played as much as everyone else I would have the player creation process down.

The Character sheet is a one page, one side sheet and is very simple. I had no trouble creating a character at all. It took me less than 30 minutes to do it. Throughout the Players Handbook the reader is encouraged to use a a sheet of paper to build out their character if they are out of character sheets or have been unable to photo copy off any extras. (Why don’t they encourage this with the power cards?) I am hoping that they will have a downloadable PDF of the new character sheet on the Dungeons & Dragons website soon. 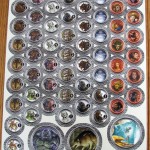 HERO AND MONSTER TOKENS
Here is an upgrade from the original 4E Starter Set. These die-cut tokens are on nice thick stalk. Almost cardboard stock (maybe it is cardboard) and they are glossy. With new monsters and in some cases what looks like updated art, these are impressive. I always thought Wizards of the Coast should sell Monster tokens alongside their miniatures. I would buy them.

BATTLE MAP
The double-sided battle map that is included inside the Red Box is printed on what appears to be thicker paper then some of the battle maps I have gotten in the past that from D&D adventures. One side is a dungeon map and the other side is an outside map.