I think we’ve all gone through it. We hear about it and we are intrigued… We finally get it to it and we love the concept… But, when we get to actually doing it, we hate it! What? I’m talking about games; get your mind out of the gutter!

All kidding aside, who hasn’t purchased a game, thrilled by the concept, loved the “fluff” and hated the “crunch”? (Bad enough I used those dreaded terms, but they are useful.) Some concepts are hard to translate into game terms, other times the game design and the story development don’t seem to come together. As much as we like to think game design is a science, getting all the right elements to come together and capture that spark that makes a great and successful game is more like art. Well art and a lot of luck. Look at all the great games that never quite made it.

I realize that the topic of this post is totally subjective; a terrible system for me may be your most beloved game. So with that caveat let me begin… 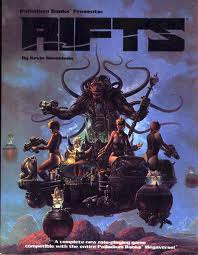 When Rifts came out it was, in my teenage mind, revolutionary. A system that mixed magic, technology, with giant robots, supernatural beings and dragons, it was like being a kid in a toy store. I loved it and purchased book after book. To this day I still think Kevin Siembieda, and all the writers that have worked on the game through the years, had some great ideas. But somewhere along the like, actually around the time the Coalition War Campaign was published, I realized that despite the developments in game design and theory, Rifts was pretty much the same game I had been playing for years.

Mind you there is nothing wrong with sticking to a game you like and don’t let anybody tell you otherwise, but when I looked at the game I realized the system no longer met my needs or expectations. It seemed unwieldy, needlessly complex in some areas, utterly simplistic in others. I came to the realization that I loved the setting but hated the system.

Every now and then I toy with the idea of actually running a Rifts game, either with the original system or trying out an adaptation. I’ve considered using the Tri Stat dX system, originally published by Guardians of Order, D20 Future or even the Star Wars Saga System.  But then I get to thinking and I can’t divorce the setting from the rules.

I had read all the horror stories about Siembieda (be they true or not that’s not for me to say) and when I went to Gen Con in 2007 I thought I’d  go by the Palladium booth and as a fan kindly tell him what I thought about his game. When I got there I shook hands and met a truly nice and agreeable fellow, we talked very briefly, but he seemed genuinely interested and so happy about the game that I didn’t have the heart to tell him. I can live with the fact that the Palladium system is not for me. If you like it, kudos, I still hold hope for a new and truly revised edition of the game. 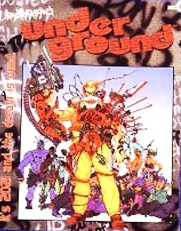 This cyberpunk supers game from the early 90s really captured my imagination. Underground was published by Mayfair Games and despite comparisons to various deconstructionist comics of the late 80s in the Wikipedia page for the game it always reminded me of the Frank Miller comic Give Me Liberty.

The book’s presentation, art, and the supplements that followed all went a long way to maintain a feel for the game that drew me into the game’s dystopian vision of the future. Now, like any near future game of the time it seems dated, but back in the 90s the social commentary seemed spot on. As much as I liked it I only rolled up a character once and we played one quarter of an adventure. Why you ask? Well the system of course!

Underground used the Mayfair Exponential Game System originally developed for the DC Heroes game. I played DC Heroes but I never really “got it”. I managed to grasp the basics but the nuances of the system escaped me. It didn’t work for me in DC Heroes game and it did not work in Underground. The system was sound, it just seemed needlessly complicated. As much as I loved the setting the rules kept me from enjoying it. So I never played it.

I guess for a game I truly liked I could have tried harder but these were the 90s; there was an innovative game out every month so I moved on to the next shinny new game, but I still keep the game and remember it fondly. And last but not least… 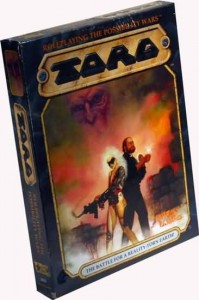 I remember the teaser ads in Dragon Magazine; I just knew this game would be something special. I think this was the first big release role playing game promotional campaign I was caught up in. I waited with batted breath for the release and on the day it arrived I got the boxed set, the adventure and the first novel. I had TORG in my hands. The game used cards to allow players a measure of control over the story, it mixed different genres in an internally consistent way, and the meta-plot was engaging. This would have been a great game, if I only got the rules.

I tried, but my teenage mind could not really grapple with it. Now on hindsight I realize I got most of it, but I felt I could not bring it all together, at the time it was overwhelming. I read the first installment of the book trilogy and fell in love with the story. I got most of the supplements published for it and even tried a couple of adventures, both as a player and DM, but it never quiet felt right. So I gave up on TORG and moved on.

But this was one setting I could not give up on. When they came out I never managed to buy the last two installments of the novel trilogy and a few years ago I found them at a used book store during a business trip. I read them, they were not up to the quality of the first novel (which was no masterpiece of literature by any means, but far superior to the next two books) but they reignited my passion for the game and back in 2008 I ran a prequel to the TORG storyline using D20 Modern.

I was very happy; it was like finally getting to meet a long lost friend. D20 was probably not the best fit but we managed and one player called it the best game of Mage that was not Mage that he ever played and to me that sounded like high praise. I still hope to revisit the game, but I’ll probably be using Savage Worlds and this excellent TORG conversion available online.

This was one instance where my dislike of the system did not stop me from enjoying the setting! I am so happy to finally put all those TORG rulebooks to good use.

So which are the settings you love but you hate the rules for? I’d certainly like to know…