Note: The contents of this post first appeared at Polyhedral Dreams in two parts. This collated post has been slightly edited. 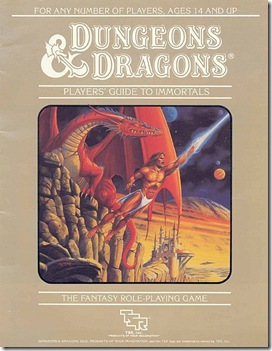 It began with a dream. I had found a new group to game with, and to my pleased surprise they were running a game of classic D&D’s Immortals — the godlike beings of the setting. While I was rolling dice for stats and trying to think up a general concept for my new character, they were finishing a combat from the previous session. In the first round of this combat, one of the players wiped out an entire city. I was astonished and delighted — but then I woke up.

I got the gold D&D Immortals box set when it came out in the mid 1980s to complete my set of the Frank Mentzer “BECMI” run. I never really understood it back then — I was 10 when it came out, and I sold it a few years later because I never thought I’d have a chance to play D&D ever again. Big mistake. I’ve been able to reread both the contents of the gold box and the Wrath of the Immortals rewrite that was released for the Rules Cyclopedia, and now I think I understand the concepts. Because of that dream, I’m feeling a desire to jump off the deep end and run an Immortals game.

I’m not very big on running games. I prefer to play; running is simply too much work. I’m better at focusing on a single character’s story. But, while I do also want to play in an Immortals game, I have an idea that I think will be entertaining to take other people through. It would be a simple “recover the stolen artifact” game, a bunch of Initiates nearing the end of their probationary period and ready to move up to Temporal rank. The twist is that while I would be using the classic D&D cosmology, where the Outer Planes are an infinite scattering of finite-sized planes (instead of the old Great Wheel of AD&D and D&D 3.x), the places I would be using in the plot would be adaptations of locations from the Great Wheel cosmology that I always thought were the most interesting. This means things like the bottom layers of Lower Planes — dark, evil, deadly places most PCs would never go. Immortals could do it and survive while still being challenged. So, what the heck, right? 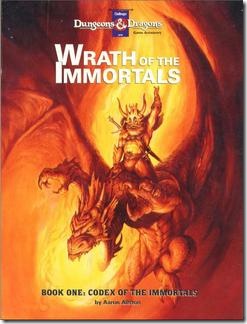 I’d probably begin with an introductory session or two for all of us to get used to the ruleset and the vast capability of Immortal characters. The question that would remain would be: gold box, or Wrath box? The Wrath set simplifies concepts, especially by translating Frank Mentzer’s wild ideas about “Power combat” into simpler “Immortal-level spells” and ditching the concept of “Talent” clusters of ability scores… but the rock-paper-scissors guessing-game inherent in the gold box’s Power combat is somehow delicious. Gold box relies on the Mentzer Basic, Expert, Companion and Master sets for info and basic mechanics; Wrath of the Immortals comes off the Rules Cyclopedia, which is easier to reference. So there are pros and cons on each side. I’m leaning toward RC/Wrath for now, but man would I love to be able to say, “Gold box Immortals? Yeah, I ran that!” (Winner: Wrath of the Immortals.) I’ve freeform-roleplayed characters of this power level before, so I have plenty of ideas of how it will look and feel. The most daunting thing will be learning to keep track of statistics like temporary Power points and what all can be done with them in the middle of combat.

I’ve got two players, and that’s probably where I’ll keep it, though I may add an NPC of matching level to boost their capability a bit (and perhaps play with the Sphere of Entropy as well). Taking a bit of a cue from the module “The Immortal Storm”, I’m going to have the artifact the PCs are chasing be broken into multiple parts scattered throughout the various planes that I’ll be adapting from the Great Wheel.

The players will be playing Immortal versions of themselves, to simplify the whole process. Both players were balking a bit at the thought of character creation, despite the fact that I’ll be starting them with ability scores of 20, and Hit Dice, Power and HP are fixed. Before we begin the actual campaign I’m going to run them through some training sessions at level 1 (beginning Initiates) so they can familiarize themselves with Immortal capabilities. Then I’ll bump them up to level 5 or 6 (nearing Temporal status) for the campaign itself, with some attendant increases. I’m getting excited by the thought that I’ll be one of the few people who can say, “I ran an Immortals game.”