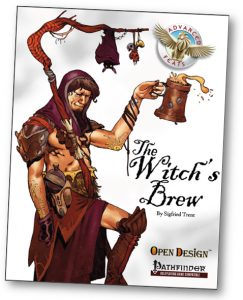 The fine folk at Open Design, i.e. Kobold Quarterly, are at it again, producing excellent third party products that support the Pathfinder RPG, specifically the classes in the Advanced Players Guide. I received the second installment of their Advanced Feats series, Advanced Feats: The Witch’s Brew, this time dealing with the new Witch class from the Advanced Players guide. I reviewed their previous Advanced Feats product, the one for the Alchemist class, in a prior post, and have been looking forward to the next one ever since. Let me tell you they did not disappoint.

I must admit that out of all the classes in the Advanced Players guide the Witch was perhaps the one I was less interested in. I remember the old Witch NPC class for AD&D 1st edition that appeared in an old Dragon Magazine and for me that write up defined the Witch in terms of D&D, I have not been particularly enamored by other versions and I pretty much ignored the class even during playtesting. But once the book came out I discovered a versatile spellcasting class with lots of flavor and role playing opportunities, needless to say, when I got the PDF for Advanced Feats: The Witch’s Brew I was excited.

The review copy PDF is a 14 page document, 12 of those actual rules. The rules are divided into three parts, an overview of the Witch, 30 new feats for the class, and three possible builds. Last time around my major gripe was the page background and some of the art, this time the book has an excellent cover illustration (reused in the book’s introduction) of a non-traditional Witch and page backgrounds of magical circles very fitting with the book’s motif. Layout is clear and easy two read in typical two column style. A big improvement!

But what about the rules you say? The author, Sigfried Trent, continues the format used in the previous book. The overview discusses general information about the class. Some might seem obvious to the experienced gamer, but he does bring up some very important things to consider in a very succinct way. The next section, 30 new feats for the Witch is, as in the previous installment in the series, the larger portion of the book, and it has a great mix of feats. Many of them usable for other spellcasting classes so don’t discount this book as just useful for the Witch. The feats that enhance the Witch’s class abilities are very well thought of, feats that augment a Witch’s familiar (which are different from the familiars of Wizards and Sorcerers) and that improve their counterspelling, for example.

Some feats have commentary accompanying them that give some notion of the reasoning behind them or details about the rules. Some of my favorite feats are Craft Magic Tattoo (I remember a similar feat from 3rd edition, but can’t recall the source right now) which is a cool idea even if some of the rule wording had me rereading it. Feats which facilitate role playing, like Extra Familiar, or Serve Two Masters, which diversify the Witch’s powers but at the same time create possible complications or storytelling opportunities are always a plus in my book. 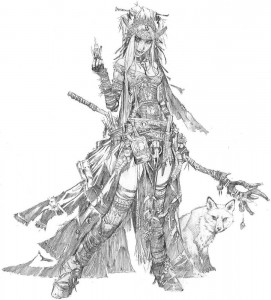 Some feats, like Seduction (skill bonuses and a bonus to the DC of Charm spells against those attracted to the Witch) show the author’s ability to think outside the box, break some preconceptions and tread new ground. I love that these feats are not merely new mechanics but role playing opportunities, a definite win in my book.

The final section, the builds, is excellent. It covers some classic archetypes, the White Witch, the Wicked Witch, and the concept of power hungry Arch Witch are all succinctly presented, well planned and are useful lot only as a guide for the potential player, but as blueprints for NPCs. I don’t know if that’s what the author was going for but I kept thinking of the book Wicked and playing songs from the musical in my mind.

This second installment of the Advanced Feats series was excellent; I dare say an improvement on the previous installment, which was already a great book. The price, $3.95, is right for the content, which will be useful to any player or GM of the Pathfinder RPG. Do yourself a favor and pick up this book.

Looking forward to the next one… Here is hoping they do a print compilation of all these books when they are all out!

Every RPG should have its own soundtrack!

What about Monsters of Sin 4: Lust? A review…