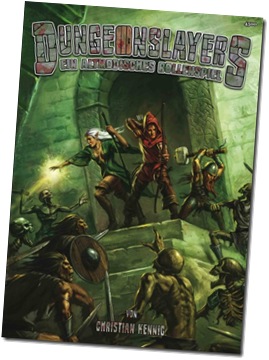 Yesterday I had the opportunity to run a session of the upcoming 4th edition of Dungeonslayers at our regular RPG pub meeting. We actually had two groups with four and three players respectively. The second group was run by my friend Mirko.

While I have run DS before, it was Mirko’s first time. But I have to admit he put a bit more effort into it. He had prepared a couple of pregenerated characters and even brought some miniatures and his own homebrew adventure. I decided I don’t need any minis and ran “Lord of the Rats”, the introductory adventure which was already part of Dungeonslayers 3.0.

While Mirko’s group was already playing we were still creating characters. I thought about bringing pregenerated characters, too, but in the end I decided against it for two reasons: a) I think the best way to learn a new game is by starting with character creation and b) I was lazy. The players decided it was best to cover all classes and races, so they came up with a dwarven fighter, a human healer and an elven scout.

The first fights were pretty easy. Normal rats don’t pose that much threat. Things changed when the characters fought a couple of nasty Giant Rats which brought at least two of the characters close to death. In these fights Dungeonslayers showed one its great advantages: it’s fast and fun.

For some weird reason the characters took the direct way to an altar room ignoring all the other opportunities for experience and loot where they fought a couple of giant rats again. When they tried to deface a statue of the evil rat god they found out that the statue was actually a golem. Alas I messed up at that point and instead of taking the stats of the clay golem (as written in the adventure description) I used the stats of the stone golem which is at least twice as difficult to fight! After the dwarven fighter was almost killed in one stroke by the golem, I realized my mistake and allowed the characters to retreat.

After tending to their wounds they were ready to explore the rest of the dungeon. After a few more rooms, a couple of in-game jokes and some minor fights it was already 10 pm and we decided to call it a day. We all had a lot of fun playing Dungeonslayers and decided to continue the game on our next pub meeting. It’s quite possible that this game might turn into a regular campaign!

NaGa DeMon: What’s In a Name?