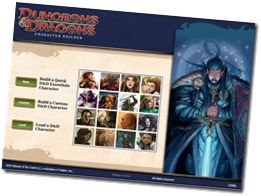 Yesterday WotC has announced a new, web-based Character Builder for DDI subscribes. While a web-based solution may have some advantages and the screenshots look quite cool, I have some issues with that move by WotC. I haven’t had the chance to talk with our resident 4E fan about this, who has probably a better understanding of what the fans want, so take my musings with a grain of salt.

The new CB will make use of Microsoft’s Silverlight. Silverlight is basically Microsoft’s answer to Flash. While it obviously has some advantages when you’re a developer, it’s still a bad idea. IMHO it’s a transitional technology, it doesn’t run on Linux, and even Microsoft will probably focus on HTML5 in the future. Heck, even Flash would have been a better idea.

Cloud-based applications are pretty popular today, and I can clearly see why. It’s handy being able to access your data from every PC connected to the web. But that also raises privacy concerns. WotC already stated they will use data mining to find out what their customer create in the CB. What if WotC owns everything you created using their tools? Then D&D fans around the world provide their corporate masters with free characters all day! Yay!

IMO the new CB is just another ploy to bind people to DDI. You can’t use the CB when you’re offline and you can’t use it when you don’t have an active subscription. IMO the old CB, while not multi-platform, was more customer-friendly. Subscribers now can’t share the CB with their group without giving out their passwords. Another thing is missing features. The new CB will released with some features missing. While this is normally not a big deal and they already promised to add those features at a later date, WotC’s track report when it comes to fulfilling promises when DDI is concerned is less than stellar. Some of the DDI tools promised before even the game has been released are still missing.

Of course, WotC is free to pull the plug on the old CB, make unwise choices when it comes to the software used and announce features that never appear, but it’s just dumb from a PR standpoint. When it comes to the digital initiative a lot of current and former fans are pretty skeptical. Even bloggers who praise WotC’s products whenever they have the chance to, pointed out the flaws in this new plan. A happy customer is a good customer, but it seems Hasbro sees its customers more like crack addicts who will keep buying as long as the drug is provided regularly.

But seriously, I doubt that the people who are making the decisions really care. For Hasbro it all comes down to money. If the new DDI forces people to keep their subscriptions to be able to access their characters, they make more money. The old CB (and the fact that it’s almost essential to properly create characters) was the entrance drug. When you want to keep using it, you have to keep paying especially with the next 100-paged errata around the corner.

So why do I care? I don’t play D&D 4E and I don’t intend to do so in the future. But I still care, because in a way I am still emotionally invested in D&D and WotC. I loved D&D 3.5 and I bought a lot of WotC products a couple of years back. But now the company and a large part of the hobby are moving in a direction I am not comfortable with. Perhaps I am an old grognard after all.