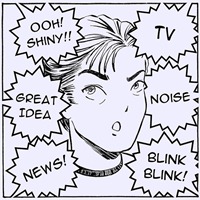 Currently I am having a bad case of gamer ADD again. I start a gaming project, scrap it, think about running a game using system A, then I switch to system B while returning to the first project, scrap it again…

For some reason I can’t just focus on one campaign and one system. Dozens of ideas are floating around in my head and every time I think I am on to something I want to pursue further, I get distracted by something new and shiny!

Of course it’s not always that bad. Sometimes I can be very focused, working concentrated on one single project only. That’s why I am currently so glad that I can play again. A friend of mine is running Deathwatch for us, so that I don’t have to worry to get something done for next week’s game.

If you have been following my blog for the last years now, you’ll have noticed that it’s full of unfinished ideas and announced but never finished projects. I am now asking myself if this is a common problem of GMs, wannabe game designers and bloggers? Or is it just me. And what have others done to cope with that issue?