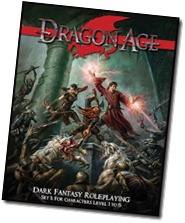 Back in December 2009 I professed my love for the Dragon Age RPG by Green Ronin. As someone who enjoyed (and still enjoys) the Dragon Age: Origins computer game it was no question whether I picked up that game or not. And the Dragon Age RPG definitely lived up to my expectations, it actually surpassed them.

It’s a great game for new players to pick up and play because of the easy ruleset and familiar setting. As a veteran player I enjoyed that the game had a great old-school feel to it. There’s a lot to love about the game and it’s underlying system, called AGE.

But what I actually didn’t expect was that about one year later people would use Dragon Age’s system to run all kinds of campaigns. It was no big surprise that people used it for other fantasy settings like Mystara, but nothing could have prepared me for Star Wars or Firefly conversions. And from what I’ve seen so far the AGE system seems extremely versatile.

More support for that system comes from Wolfgang Baur’s Open Design in form of the Midgard setting. Following the patrons’ wishes this setting will not only support the Pathfinder RPG but also AGE. Actually more patrons voted for Dragon Age than for D&D 4th Edition. That was actually an outcome I didn’t anticipate.

Midgard was actually not Open Design’s first brush with the Dragon Age game. There have been several articles about Dragon Age in the last few issues of Kobold Quarterly including one by Chris Pramas, Dragon Age’s lead designer, which provided players and GMs with Backgrounds that allowed them to use the AGE rules for a game set into Green Ronin’s Freeport.

This all shows me that the AGE system seems to have legs of its own. I can easily imagine a more generic AGE system rulebook which allows GMs and players to run all kinds of fantasy games (and perhaps games set in other genres) without all that Bioware IP. I would even go so far and say that AGE could even become this day and age’s D&D. If Green Ronin announced a Freeport RPG using AGE rules today, I wouldn’t hesitate to preorder it.