Yesterday I stumbled upon this post at the famous BoingBoing blog which featured two pieces of awesome NASA artistic renderings of possible future space missions. I love science and space exploration. Even as a kid I read and watched everything I could about astronomy, space exploration and physics. And of course I almost devoured any SF novel I could find in the house.

Ever since I started roleplaying I thought about running a science-based space exploration campaign set into a near future using only what today’s scientists deem possible. So there’s no FTL travel, no psychic powers, space travel is dangerous and very expensive. Think of a campaign where the players are astronauts exploring Mars like in Ben Bova’s novel “Mars” which I read with much enjoyment a few years back. 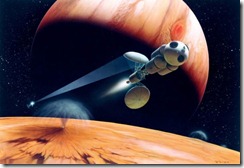 The problem is that even if you are into science and space exploration it’s pretty hard to convey that excitement in a roleplaying game. Let’s face it: while doing actual science (or space exploration) may be exciting, most of it is hard and sometimes boring work. And that’s the last thing you want to have in your roleplaying game. In RPGs it immediately gets more exciting if you move away from realism and add fantastic elements or some kind of conflict (combat in most cases).

That’s why why the heroes in our games are for example Starfleet officers and not NASA astronauts. But I have not given up. What is necessary to make a scenario like the aforementioned Mars mission exciting for a group of players without adding unrealistic elements. Would realistic conflicts and problems be enough to keep things interesting? What are your thoughts on that subject? Please share your comments below.