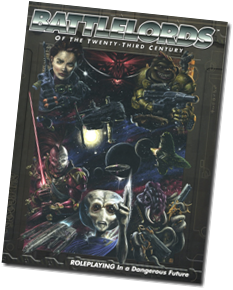 Some of you might remember this game back from the ‘90s. Battlelords of the Twenty-Third Century is a SF roleplaying game back from the “Golden Age”. I actually never played it back in the day, but I definitely have at least read the title in magazine ads several times. Since my funds were pretty limited at the time I never actually picked it up but it had been on my wish list for quite some time. I actually had no idea what it was all about, but that name alone spurred my imagination (which was the case with a lot of RPG products back then, before the world-wide web).

And now Battlelords is back with a vengeance. The guys behind SSDC Inc. took the last edition of the game, cleared up the rules, changed the layout and added some new art. The result is a very fine looking SF roleplaying game with a distinct ‘90s feel – and I mean that in a good way! Especially old fans of the game will be glad to hear that it’s back in print and also available as PDF!

If you want to learn more about Battlelords, check out the official SSDC website. You’ll find all the available products and an extensive wiki there.

My fellow blogger Sunglar actually played the game back in the ‘90s, that’s why we are planning to tackle the Battlelords review tag-team style. So stay tuned!