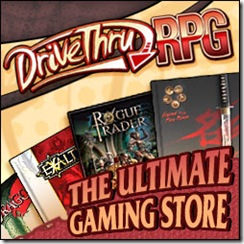 Again I can provide you with a coupon code that gives you a 20% discount on selected products at DriveThruRPG/RPGNow. The code Holiday2010BPCX which expires on January 5th can be used with the following products:

In addition to that we might be able to give away some things for free, so stay tuned! Thanks again to OneBookShelf for providing us with these codes as part of the Blog Support Program!