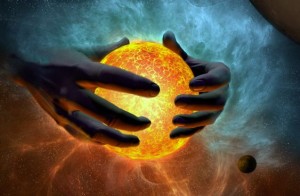 Well, all good things have to come to an end.  This will be my final post in this series on World Building.  I think it has been a pretty fun ride.  I hope I have given at least a few tips that you might be able to find useful.  Today, we’re going to talk about finishing your world…or not.

Although most of the time game worlds that we explore, play in, or build are just a little something designed for a particular campaign or adventure, sometimes the worlds we create are meant to be so much more.  Many of us embark on these massive projects and try to produce something huge.  For the last 10 weeks or so I have written about these kind of worlds and the kind of effort it takes to build them.  But truly, when does the world building process stop?  At what point can you put your pen or keyboard away and declare that you are finished?

Well, I think it really depends what you’re looking for.  If you’re making something small and specific, the world building process might end at a very specific point.  Once you have reached the point where you have designed everything that the adventure or campaign requires, you’re pretty much done.  You can step away from what you have produced and know that you have accomplished all you need to do.

But, what about those larger projects?  What about those works of world building passion that each of us GM’s holds dear to us?  How do these worlds end?  From what I have seen, most of these worlds go the sad way of burning and dying out.  I have had at least two worlds-in-progress which simply fade away out of my mind.  I simply lost interest in what I was trying to create – perhaps because what I thought was interesting changed, or because my gaming groups went away.  Regardless of the reason, many game worlds never get completed.  Poor game worlds.

But, there are some worlds that go far beyond getting finished.  There are some campaign settings which defy that finish line.  For these worlds, there really is no end, unless that end comes in a cataclysmic apocalypse which is more a part of the world’s narrative than it is any end for the actual production and writing of the setting.  These worlds live on there own and never get forgotten.
So, when do you know that you’re done in these cases?  That question really has to be answered individually by every setting builder out there.  It all really depends on passion.  If you have the drive to keep your world going, keep it going forever.  A lot of very famous settings live on after years upon years of play and exploration by countless gamers around the world.  The Forgotten Realms has been going strong for decades now.  That game world has managed to suffer through several edition changes and live to tell about it.  Does is it have an end in sight?  Nope.  The designers that have put their time and effort into that setting won’t be letting it end any time soon.

Your personal game world exists just like the world around us does.  Unless you want it to end, it will keep living on in your imagination.  Year after year, you can come back and breathe new life into it.  That’s part of the reason that building worlds like this can be so much fun.

So, in parting, keep your worlds alive.  They like it that way best.  Good luck.  Happy world building.