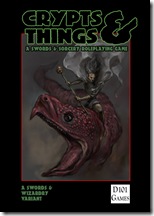 When it comes to the Old-School Renaissance I have some mixed feelings. On the one hand I enjoy the simple old-school charm of games like Swords & Wizardry or X-Plorers, but on the other hand I am unhappy with the lack of innovation and creativity in this part of our hobby. Games like the aforementioned X-Plorers, Stars without Number, and Lamentations of the Flame Princess are the laudable exceptions here.

But recently I read about another new old-school game which seems to take things in a different direction. Crypts & Things, will be a swords & sorcery game based on a heavily modified version of the Swords & Wizardry rules.

Here’s a list of the changes from the core rules quoted from the games’ announcement:

The setting will be based on the works of Clark Ashton Smith, Fritz Leiber and Robert E. Howard and aside from being inspired by aforementioned authors will be original. Both setting and the expanded S&W rules make me particularly interested in this game and I will definitely pick it up once it has been released.

The pressure of being GM