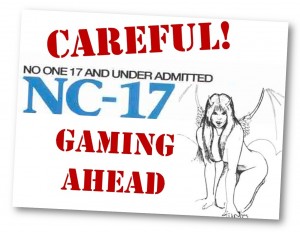 I have always liked to push the envelope in my games, let’s call it Shock GMing! Trying out new storytelling methods such as games where events occur in a non-linear fashion, dream sequences, gimmicks like dressing up as a villain (I know that is dangerously close to cosplay), handing out props like a plastic sword or a glass vial with a strangely colored liquid inside to represent magic items, to more mundane things like altering, tone, pitch and volume when I speak. I still remember the a session when I talking in a calm normal voice and unexpectedly shouted and pounded on the table to represent a startling situation during the game. One player almost jumped out of his skin!

These are far from the only tools in my GM Toolkit, but I also enjoy introducing moral, philosophical or controversial topics and situations in my games. I realize this approach may not be for everybody, after all we ultimately role-play to have fun, and dealing with such topics as religion, politics, may not be everybody’s idea of “fun”. But by the same token I enjoy telling complex stories that tackle such subjects and I believe that while the goal of the game is having fun, it should be fun for all concerned, including the GM. If all I could tell were stories about endless dungeon crawls in worlds of black and white morality, my GM days would be numbered.

Why all these reminiscing and philosophical considerations you ask? Well it has to do with my weekly game and a recent even that motivated me to write this post. It actually happened three sessions ago and I wanted to blog about it the same night it happened, but I considered it and decided I should give myself some time and simmer down, deal with the consequences, before sharing this with you dear readers.

A little background if you’ll indulge me. We are currently playing a supers game using the Mutants & Masterminds 3rd edition rules, the players are among the first even super humans in the world and the game is a mixture of four colored super heroics and a semi-realistic exploration of their roles and effect they have on the world. We’ve played 14 sessions and so far the players seem to enjoy it as much as I do. Some weeks ago two of the characters infiltrated the compound of a religious fanatic who was condemning all supers as abominations and inciting people to attack them.

The two undercover supers joined the fanatic’s followers and got close to him. To their surprise (or maybe not) the leader of the cult had powers, a strange mix or long distance mind control and the ability force people to do his bidding. They began to suspect he was abusing his followers and the fanatic in turn tried to use his powers on them. He eventually mind controlled one of the player characters and used his powers to rape him!

Ok I’ll let that sink in for a minute…

Your reaction was probably similar to that of my players. The player who’s been with us the shortest time was visibly shaken; the player of the affected character was speechless. The room was hushed for a moment. This was a risk on my part, one of those moments that can ruin a character through no action of his player, permanently disrupt a game or even doom a campaign. I was unsure of whether to go through with it, but now, in hindsight, I am glad I did.

Incorporating this element into the story was not something I did lightly. I’m pretty sure you’ve heard or read the cliché that character’s “speak” to the author. Be that as it may, when I create important NPCs or villains I try to imagine myself in their shoes, what motivates them, what makes them tick. I don’t overdo it; much of what will come out of this experiment may be details that never impact the game directly, but I try to fill in the gaps enough to allow me to represent the NPC credibly. The more I thought about this religious fanatic villain, the more I saw him taking advantage of his followers, abusing his powers in unspeakable ways. I did not set out to rape a player’s character, that was just who the villain was, the character was a victim.

I had other concerns, rape is a horrible act, and I did not mean to trivialize it or belittle victims, this was an adult theme I wanted to explore in the game. Also there was the issue of it being a same sex rape, I did not want this to be a commentary on sexuality or sexual preferences, rape has nothing to do with that and everything to do with violence, a terrible crime. And let’s not mention the religious undertones… So I wrestled with the idea for a while.

Incorporating subjects such as this one is not something you spring on a group of players you just started game mastering for. In such a situation you don’t know how people feel about specific topics or how they may react. So if you remember one piece of advice out of this let it be this: Don’t pull a stunt like that on people you don’t know well.

In our case my group has been playing together for years, we are friends first and gamers later, so we know each other pretty well. Also the player who was victim to the villain’s mind control is someone I have known for a long time. He was playing a happy go lucky character, a charming speedster, but I could tell he was eager for his character to evolve, to change; we had even talked about it incidentally, so when the villain mind controlled him I decided to incorporate this complicated issue into the game and run with it.

After the initial shock wore off, the terrible event had consequences. Once freed from the villain’s influence the character took his revenge, killing him and throwing the whole compound into chaos. The player used the opportunity for his character to grow. He has become darker, edgier, conflicted, trying to deal with what happened as a hero and in his private life. The other super who had infiltrated the compound with him is feeling guilt over the event. And then there is a civilian friend of the raped hero who had joined the cult in an attempt to spy on them, suffered a similar fate, and is now pregnant. So as you can see the fallout from all this is far from over.

These are not the only adult topics we have tackled in the campaign. Two other players are playing a couple and one of them is invulnerable and casually mentioned that she can no longer fell anything, not when her significant other kisses her, or caresses her, or even when they have sex. We have run with this subplot, NOT role-playing intimate moments mind you, but role playing the emotional fallout of this on their relationship. One character is dealing with custody issues over his daughter with his ex-wife, and another is setting himself up as judge, jury and executioner, bringing him in direct conflict with his teammates.

Some people may read this and say, “Well that’s not for me! If I wanted custody and intimacy issues I’d stick to the real world!” And you know what? That is totally valid. Tackling complex issues during a game is not fun for everyone. There is no right or wrong way to play, so play what makes your group happy. Me and my group, we like to wrestle some complex issues and use them as springboards for role playing. In the past we have dealt with slavery, religion, corrupt politicians, secrets and treason, slavery and torture, and the consequences of all these.

I have taken it to far sometimes, my last D&D 3rd edition campaign was probably the darkest fantasy game I have ever played, it was hard to tell who the good guys and the bad guys were and I liked it like that. Not everybody did, one player even stopped playing the campaign. That is why now I try to discuss these subjects with my players, not specific details, but the tone and topic, the expectations for the game, so we can all be on the same page. Live and learn; if you screw up, learn from it, if everyone is on the same boat and you play it right complex issues such as these can enhance the role playing experience.

When the game session ended, like I do every session, I asked the players what they thought of the game; what they liked and did not like. The player whose characters had gone through the traumatic experience admitted that while it was shocking he was ok with. The newest member of our group said, she could not believe what had happened and something to the effect that this might have been the most shocking thing she had experienced in an RPG game. A long time player turned to her and said, “You have not played with him long enough, give him time” I took both comments as a compliment, my work was done!

So where do you stand? Do adult, or complex, issues have a place in your game? What elements do you feel comfortable with? I’d sure like to know… Thanks for reading.