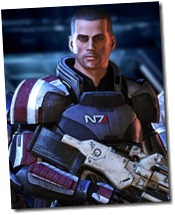 From time to time I get the urge to run a SF campaign using the setting presented in the Mass Effect series of computer/video games. The game series has been critically been praised for it’s graphics, gameplay and story, but also for the extremely deep and detailed background. The ingame Codex contains a lot of information about known space, alien species, technology, and history.

I found it especially amazing that the creators of this game series also included a lot of background information on topics that don’t even have any impact on the games story. But that is what makes the Mass Effect setting so believable and deep.

In addition to that the game cleverly uses familiar science fiction tropes that help players to get into the story quickly without the need of long explanations. But instead of just presenting us with a overly clichéd universe, there are a lot of interesting twists that keep things fresh. I think you can tell that I love these games. 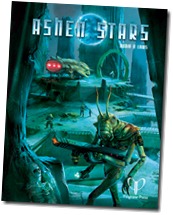 Recently I preordered Ashen Stars, the latest Gumshoe-powered roleplaying game written by Robin D. Laws. Like Mass Effect it’s a SF (or rather Space Opera) game that makes use of classic Space Opera tropes but cleverly combines them with more modern elements like cyberware and a more grim and gritty outlook.

The Gumshoe system was designed to support investigative campaigns and is surprisingly versatile. When I first read about a Gumshoe SF game I was wondering how an investigative Space Opera campaign could work. But it’s actually pretty easy. Just have a look at a random Star Trek episode: something mysterious is going on, the crew investigates, gets clues, there’s some combat or plot twist, the clues are put together and the mystery gets solved, end credits.

And when you think about it, the story in Mass Effect shares a lot of similarities with this. The protagonist Commander Shepard is on an investigation, trying to find out more about the mysterious Geth/Collectors, and the Reapers they are working for. There are a couple of plot twists and combats, but in the end the clues get put together, the Commander kicks some alien butt and the universe is once again saved.

I have to admit I haven’t read the Ashen Stars preorder PDF that thoroughly. It’s over 300 pages long and in its unlayouted form its not that easy on the eyes. But from what I’ve seen, almost everything needed should be there. 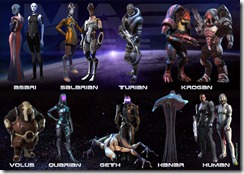 In my opinion the sapient species from Mass Effect should be the easiest to convert. Ashen Stars already contains some guidelines for playing Nonstandard Character Types that could be used to build turian, asari, quarian, salarian or krogan characters easily. Ashen Stars also has rules for starships and starship combat, in case you want this to play a mayor role in your campaign, too.

So what do you think? Could a Gumshoe-powered game be a good fit for the Mass Effect universe or am I on a wrong trail here?

By the way, you still have the chance to preorder the special “Ashen Stars Stellar Nursery Edition”. If you’re a fan of Space Opera RPGs and if you have a soft spot for the Gumshoe system, you should at least consider grasping that opportunity, especially since you get a hardcover copy of the final game signed by Robin D. Laws himself plus some very nice extras for the regular price of the book. You can’t beat that.