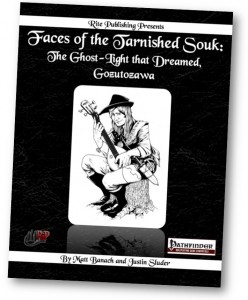 With a name that long, that title pretty much takes care of the review. It’s certainly a mouthful! This is a short book in PDF format detailing one of the many strange inhabitants of the Tarnished Souk, a fantastic market presented in the Coliseum Morpheuon, which I reviewed a while ago. I had seen this Rite Publishing series and was intrigues since I enjoyed the aforementioned book so much. Imagine my thrill when they provided a review copy.

I’ve had the book for a while now (and apologize for taking so long to review it) but every time I sat down to review it I was at a loss for words. Mind you, it’s not because the book is bad, on the contrary, I loved it. It presents a detailed and very original NPC, very fitting with the dreamland setting but usable in many campaigns. And here lies the rub…

This is such an interesting concept for an NPC that talking too much about it might just ruin the surprise. I really thought about how I could review this without giving it away and I realized I can’t. So I will resort to the tried and true method of game manuals of old. From this point on this post in meant for Game Masters and possible purchasers of the book, all others turn away! (And we all know how well that worked on the books…)

Gozutozawa is a will-o’-wisp Summoner (the class from the Pathfinder Advanced Player’s Guide) who gave up its evil ways and plays musing in the dreamland market though its eidolon, a humanoid bard it summons with its powers. The concept is so simple and at the same time so original. The book includes an introduction to Gozutozawa, ideas on how to use the NPC and statistics for it at Challenge Ratings 21, 14 and 8. It details the will-o’-wisp at different moments in its history, along with the Eidolon.

I did not comb over the details of the stat block, but they seem solid after cursory look. The book also has new rules for monstrous Summoners, magic items, templates. In 16 short pages the book certainly covers a lot of ground. After reading it I thought this was a much longer book, and I mean that as a compliment, it just manages to accomplish so much. The layout is simple yet functional, the art sparse but it covers the most salient aspects, specifically Laughing Lucky the eidolon.

One of the things I liked the most about this product is that it doesn’t present a combat heavy NPC. In fact Gozutozawa is more a dreamer (well more accurately a music lover) than a fighter. The will-o’-wisp is an enigma for the players to puzzle over, a source of mystery and information, a great role-playing opportunity. Which is also what I liked least of all, let me explain.

Though my years as a Game Master I have learned that I do not need to write up the statistics of every single NPC, or even every opponent, re-skinning and repurposing stats is one of the best tools a GM can have. A creature such as Gozutozawa for me works better as a series of notes of what it could do with no hard and fast stats. I understand the benefits of having full stats, Pathfinder is after all a crunch heavy game and I know some players would mind the GM making things up as he went, so this is an invaluable resource to have fully stated NPCs.

Matt Banach and Justin Sluder create an interesting NPC, made me look at wil-o’-wisps in a whole new light. The writing is solid, informative and entertaining. I must say despite what I said above I really enjoyed this book. If this is a sample of the quality of the series, then I look forward to reading more of it. Faces of the Tarnished Souk: The Ghost Light That Dreamed, Gozutozawa is available at $1.99 on PDF. Let yourself be lulled by the sweet music of this intriguing NPC.

The time I almost quit gaming!