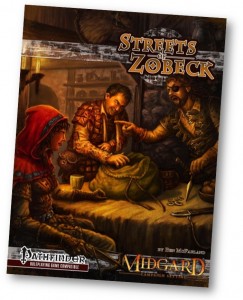 The folk at Open Design are kind enough to keep sending review copies of their excellent products, and I just cannot stop reading them. Are they trying to get me to read nothing but their stuff? Not that I am complaining. They produce some outstanding products for my fantasy game of choice (now let’s all say it together, the Pathfinder RPG) and I really enjoy their books. This time around I’m doing a pair of reviews of two related products.

They are part of the Midgard Campaign Setting, their campaign world (and current patronage product), and continue to flesh out what has proven to be a fascinating setting, full of interesting ideas, whether you want to run it as is or you want inspiration for your homebrewed campaign. I reviewed PDF copies of both books. Streets of Zobeck is a 94 page (90 pages of actual content) adventure anthology full of locations, NPCs and new rules of the gritty fantasy variety. I was impressed by the layout, art and tone; it all reeks of the seedier elements of fantasy. There are some adult topics here (prostitution for example), but nothing that seems gratuitous or uncalled for, it’s fitting, gritty and dark.

When I read the preface to Street of Zobeck I was a little worried. I have never thought of myself as a grim and gritty fantasy fan. I read some Lieber and Thieves’ World but they were never my favorite. Some of the other inspirations mentioned, the Black Company, Mieville, I have never read. I think of myself as more of an epic fantasy guy… But my players may disagree. Some have called my campaigns dark, gloomy and not at all black and white but all shades of gray. So how I perceive myself may be totally different from the reality. This may call for some introspection, but you are not here for that, you are here for the review. Let’s get back to that.

Streets of Zobeck is a supplement for another book, Zobeck Gazeteer. I do not own that book, so I imagine there is some details I am not getting, but from what I see here, I really want that first book. There is even a city map… I see the Kobold’s devious plan; they give me a taste to reel me in! I am on to them.

I REALLY like the art in this book. It is very fitting for the book, even the maps which look hand drawn, maintain the gritty feeling. Yeah I know I said this before but it’s worth reiterating. Which takes me to the firs t part of the book, Faces of Zobeck, an excellent set of NPCs, some are what you expect for adventures set in the underworld, others truly surprising. Some get illustrations, but with such a beautifully illustrated book, I would have loved to see images for each of these characters.

Places of Zobeck is my favorite chapter of the book. It’s all about locations, with maps, scenario ideas, personalities, even a new rogue archetype, The Fixer. I rarely run pre-published adventures, so this is the chapter I can probably use whole cloth with little modification. And then it’s on to the adventures, seven in total. I really enjoyed reading them and there are lots of little details I’m sure to lift for my games. The adventure spread is pretty good, from level 1 to 11, which I think it’s about as high a level as this type of gritty adventure works. There are combat, investigation and role playing opportunities a plenty in these adventures. The highest level adventure, Flesh Fails was my favorite of the lot. Put together they can be the base of a great campaign. The last chapter, Traces of Zobeck, has feats, traits, spells, and new magic items. 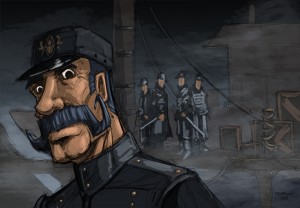 Alleys of Zobeck is a supplement for Streets of Zobeck. It’s a 17 page book that opens with a brief adventure that introduces the city to new players and has additional goodies for the first book. It has rules bits, locations, NPCs, all good, but you really need Streets of Zobeck to make the most of this book. I get a feeling this is a collection of all the stuff that had to be cut from the first book. Don’t get me wrong, its good content but it really does not stand on its own. It’s a mere $2.95, so I cannot begrudge them for the price. Street of Zobeck is available as a PDF for $9.95 and as a Print+PDF combo for $19.95.

This is true fantasy noir. I was pleasantly surprised by the content of these books. This is usually not my fare and it was a pleasant surprise. Kudos to Ben McFarland the lead designer and his team, this is dark fantasy at its finest!

Summer Sale at the Kobold Store

5 thoughts on “What about Street of Zobeck and Alleys of Zobeck? A pair of reviews…”