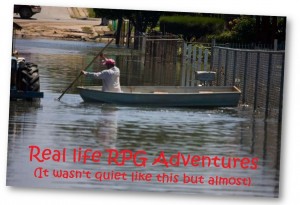 I have not posted here since July 1st, and my last post was about the planned Puerto Rico Role Players Geeknic. Was it the greatest geeknic on earth like I predicted? Well if a concussion, incessant rain, floods, trips to the hospital and your car getting stuck on a flooded street are your idea of great, it was epic!

Don’t worry everybody is alright. My lull in posting had nothing to do with getting hurt, it’s all work and real life responsibilities keeping me away, but vacations are approaching and I hope to make up during that time. But I know you are not here to read about my life, you are here to know what happened at the geeknic? Well let me tell you…

One of the wonders of living in a tropical island is the weather. It’s usually beautiful and sunny year round, BUT every so often we get torrential rain (and don’t get me started about hurricanes) that was the case last weekend. It rained all weekend, but when Sunday rolled along, despite some drizzle, it seemed like the sun was coming out, so I made my way to the park where the geeknic was going to be held and met up with my fellow early birds. We set up and then the rain came… We began moving stuff to a dry place and there was when the first mishap occurred.

A friend slipped and suffered a concussion. He lost consciousness and we had to call for an ambulance. I followed in my car to make sure he was alright. Thankfully he was, but as I was leaving the hospital I got a call from those still at the park, the rain was not abating and the place was flooding. So I started calling people, telling them the geeknic was cancelled, posting it online, trying to drive back to the park, and I drove straight into a flooded street. I had cars behind me so I drove through, and when I was about to leave the flood, the car stalled and died…

Needless to say this was NOT the best of days. I look in my rearview mirror and I see a small car stuck with water up to middle of the car door. So my Good Samaritan mode kicks in. I exit my car, wade through the water that was up to my knees, yell to the driver to shift the car into neutral and pushed him out of the water. What happened next really baffled me… With the car out of the water the guy manages to turn it on, waves thanks and drives away. Needless to say I vas peeved.

Right there and then I thought this was pretty much the worst day, and then my friends proved me wrong. They first started calling to see how they could help me, some tried to make it to me but the flooding was too bad. Eventually someone got to me, pushed my car to the side, stayed with me, and when he was pushing my SUV to the nearest gas station, the car came to live! Back at the park the rest of the group picked things up, ate the Gordopleta© I hadprepared (and which I did not get to taste by the way!) and made sure everybody knew that activity was cancelled.

The geekcnic might have been a bust, but everything that happened reinforced my idea that role-playing games are a great way to make friends. I look around and some of my closest, best friends I met through gaming, and many of my older friends I gamed with, so it is something we have in common. So if your friends are the family you choose, then my family is made up of gamers! The person who slipped and fell is safe and sound, my car is fine, and everybody else was fine, if only a little wetter. I hear a lot of people say that they game with acquaintances, and while that may be true, give people a chance, get to know them, true lasting friendships are forged around the table.

I want to thank all my friends, old and new, in Puerto Rico Role Players. A special thanks to PJ (he’s posted here in the blog as @luniticus), Julianna, Jesús, Edwin, Misael, Misael Jr., Luis A., José Fernando, Pierre, Fernan, Luis L., Carlos, and particularly to Jaime and his wife Carmen. Jaime pushed my car, helped me through all the day’s hardships and stuck with me until the end.

So dear reader, forgive me if I wondered off into personal anecdotes, but the best thing about my games are my friends, and every now and then you need to tell them. Back to posts about gaming… thanks for reading.