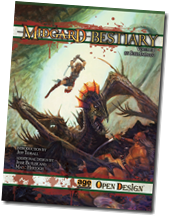 If you haven’t been living under a rock for the last few years, you surely heard about Green Ronin’s Dragon Age Roleplaying Game. Instead of trying to copy the system used in the Dragon Age computer games, Green Ronin designed an original system, called AGE, or Adventure Game Engine. Even though the system has been designed with a specific background in mind, people started to use it for different settings basically from day one.

Open Design and Kobold Quarterly have been supporting AGE with new material for a while now, and the upcoming Midgard Campaign Setting will not only be designed for Pathfinder but for AGE as well. Open Design’s latest release, the Midgard Bestiary Volume 1 by Josh Jarman is a 58-paged PDF containing fifty monsters drawn from five years of Open Design projects. 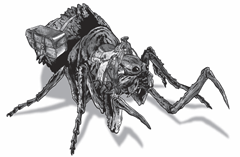 If you are looking for a book that contains pretty standard fantasy monsters, you’ll be disappointed. Midgard Bestiary contains some of the more memorable monsters I’ve seen in a while. One of my favorites is the Carrion Beetle, large beetles which are used as pack animals or even mobile weapon platforms.

Each adversary description comes with an illustration, full AGE stats and often unique powers. Some of the illustrations are even in full color, although the majority of the artwork is in black and white. Overall the artwork is of pretty high quality and the layout is very clean and not too cramped. 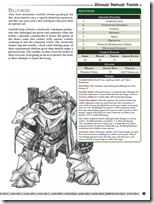 I think I mentioned several times that I am a fan of adding steampunk elements to fantasy worlds and Midgard obviously contains quite a few golems, clockwork contraptions and similar devices. But the majority of creatures described in the book should be easily be modified to fit into any fantasy setting.

So is the Midgard Bestiary Volume 1 worth it? If you want to use the AGE system for the upcoming Midgard setting it’s definitely a must-have. If you want to keep playing in the Dragon Age setting you should at least consider it. You can never have enough monsters and the bestiary also provides you with a few new powers, stunts and even a couple new weapons. And since it only sets you back $4.99 for the PDF, you really can’t go wrong! That’s an excellent price for a great and very useful product. You can buy it either directly from Open Design or via DriveThruRPG.

Summer Sale at the Kobold Store