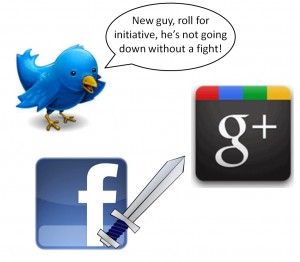 I was not keen on Twitter at first. Some may say I am not big on change, but let’s just say I did not close my MySpace page until last month! I was not quick to migrate to Facebook when it came along, so when I began blogging and discovered how the RPG blogging community was active on Twitter I reluctantly joined. It took some time for me to get used to Twitter, I still use Facebook and remain very active, out Puerto Rico Role Players group main form of contact is there. I use Facebook for my games all the time, and it’s worked better that most other online tools I’ve tried, it has to do with the service’s pervasiveness, I am well aware of that.

So little by little I have balanced my use of Twitter and Facebook. These days most updates I do on Twitter and they appear on Facebook. Oftentimes I will post in English in Twitter, where the majority of my followers are English speakers, and do my occasional update in Spanish in Facebook, where I have a LOT of Spanish speaking friends.

One thing I had NEVER done was participate in a large scale real time discussion with lots of other people. I get hashtags; I had just never tried it. Some time ago I had seen the #RPGchat discussions and lurked, fascinated by all the ideas floating about. So last week I saw they were discussing Gen Con this week and decided to join in. I used my iPhone with the Twitter app and was able to follow and participate so easily.

The people participating in the discussion where friendly, helpful and so much fun and I won a prize they were giving away! It was the most fun I’ve had in Twitter. Shout out to all the fine folk there, it was a pleasure to meet you. I will definitely be joining them again.

I did embrace Google+ early one so worry not I’m keeping up to day.

Just in case, if you are interested, in Facebook you can find me as sunglar@hotmail.com, in Google+ as sunglar@gmail.com (you can see a pattern emerging here) and in Twitter as @Sunglar. I’d love to get to know you all better!