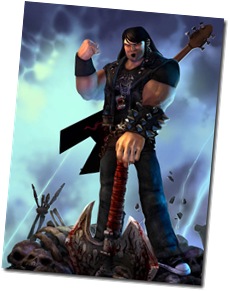 As a lot of ideas these days, the idea to this post developed on Twitter. Zachary from RPG Blog 2 tweeted about being interested to find out more about gamers’ music tastes. The idea developed over a couple of tweets, Michael Brewer from Mad Brew Labs and I joined the discussion. Finally we decided it would be best, if Zachary created a short survey. It basically just asks about your favorite rock band and about your preferences when it comes to music in gaming. It would be great if you could take a minute to check out the survey.

Roleplaying music
I usually use orchestral movie or video game soundtracks or music especially created for roleplaying games in my gaming sessions. Sometimes I use the music I later want to use in the game session while preparation to get me into the right mood. Especially when I am planning a horror game, creepy music is playing all day. 🙂

If you want to learn more about my preferences when it comes to music in gaming, please check out some of my other posts on that topic as well:

Rock music
In some occasions I have used rock music during game sessions. I remember that I often used rock music while running Shadowrun and I used metal music in some D&D combats.  Especially when I want to use rock music in D&D I prefer bands who use fantasy elements in their songs. Bands like Manowar, Blind Guardian and Rhapsody of Fire come to mind. But I am pretty sure there are dozens more.

When asked about my favorite rock band, I usually can’t give a definitive answer. I have been a fan of Genesis, Pink Floyd and Dire Straits for a long time, but recently I’ve started to listen to bands like Nickelback, Theory of a Dead Man, Evanescence and 30 Seconds to Mars, too. But I think my all-time favorite is still Dire Strait’s “Brothers in Arms”.

When is a table not a table?