This post needs a preamble. As I was finishing my weekly game in the wee hours of the night (more accurately really early in the morning) I was asking among my players for possible topics they might be interested in reading about. Although some ideas were thrown about I ended up writing the Superhero games are hard! post. After I was done writing I noticed a message from my player and good friend Sara suggesting the topic for this post. Big thanks to her for the inspiration! 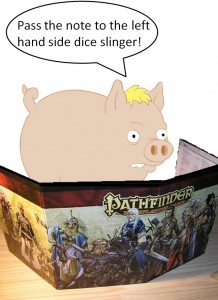 Imagine this… “The table is abuzz with excitement. The players are about to make a pivotal decisions that could change the game. They are throwing ideas back and forth and suddenly someone notices the note quietly being passed by one of their own to the nemesis behind the screen… FOUL cry the other players. A puerco paper has been unleashed on the game!”

Call it what you may, secret communication between the players and the Game Master can be a contentious issue. At our table we call them puerco papers, puerco literally means pig, and well paper you get. So it’s meant as a disparaging, and somewhat tongue in cheek, remark on the player writing the note. I don’t exactly recall exactly how the term came about, but I seem to remember my friend Sammy coining it at his table and cross pollinating to ours through mutual players, even before Sammy played with us. It’s part of the unique lexicon, like “Tempus be praised”, “anchorchas” or “chiclán”, that develops among a gaming group.

Players are not the sole perpetrators of puerco papers, Game Masters often find the need to pass along secret information to a player or players, by either passing a note or pulling them aside from the table for a few moments. So it can be either a puerco paper or a puerco meeting, even a puerco session if the GM meets with a group of players outside of the regular gaming session. With current technology the communication can happen via text message, in or outside a session, e-mails, social media, you name it. In my experience players are more forgiving when the GM does it, but when a player passes a long a note it can be the seed of discord and distrust.

I believe the puerco paper (in almost all its variations and I’ll get back to this caveat in a moment) can enhance a game. I really believe that players can get unnecessarily suspicious of a fellow player having secret communications with a Game Master. If we are creating truly complex adventures and characters with depth, then it is normal to expected that different characters will have different motivations, and sometimes those become important. Communicating those to the GM can be important and the player may not feel comfortable talking about it in front of his fellow players.

I’ll be the devil’s advocate here argue against my own point. You could say that players should be able to keep player knowledge and character knowledge separate, and whatever one player says to the GM will be treated accordingly. The argument may be made that to keep suspicions to a minimum there is no place for such shenanigans at the table. Some people may even say that’s not the kind of game we want to play. We want a simple game with none of these secrets and plans, nothing too complex. That last argument I can understand. It’s not my style of playing, but I understand it.

I really believe that secret communication can enhance a game.  It allows players to have their own agendas, secret plans and in many ways ads depth to the character. Likewise it allows a GM to share information specific to certain characters, even knowledge they may only poses, and it’s up to the player to decide whether to share it with the others. Some warning, make sure the information you share is not pivotal to the game, there is no surer way to bring an adventure to a halt than a player not getting it and then sharing the wrong information. Use it to share information that can enhance what they already know, things a certain character can add to the discussion, but not the key element to the plot.

Also make sure you give equal time to all players. Some will love the puerco paper and write endless notes, and some will hate them and not participate.  Don’t force this in a player who doesn’t want to do it. Rein in a player going too far; keep the flow of information manageable. You don’t want to be running two games in one session due to all the notes. Make sure you can manage all the extra information before encouraging this practice.

I use e-mail and other means of communication through social media to do some secret communication with players, but I try to do most in session. I can pull a player aside and talk with them briefly for these same purposes and I often do, but I try to keep it to a minimum and do it quickly. A puerco meeting should not interrupt the flow of the gaming session. I draw the line at puerco sessions; I don’t like the idea of playing with some players and not with others. It just creates a sense of being left out, of cheating them out of possible experience, and generates a general sense of dissatisfaction.

Overall I think that secret communication among players and the Game Master can greatly enhance a game.  Like Michael said in a recent post, it all comes down to trust. If you build trust among the group, let them see you will handle all information fairly and not play favorites, then adding these tools to your gaming options can greatly enhance the game and add nuance to character development.

Those are my two cents, you may agree or disagree. Looking forward to what you think…