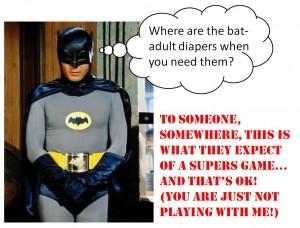 If you’ve read any of my posts in the recent past you probably know I am currently running a Mutants & Masterminds 3rd edition game. After fantasy, which is my favorite RPG genre, Superheroes are my second favorite. I have started more supers campaigns that any other genre besides fantasy. Off the top of my head I can think of eight, and about two dozen more that were planned but never executed. Of those I considered one really successful, well until this one.

My current Dawn of a New Age campaign has become the favorite supers game I have run. Before that it used to be a Heroes Unlimited games that we played for a few months. I don’t recall exactly how long that other game ran (this was in 1992) but I think this one has surpassed it. Last night we played our 30th session, over seven and a half months of weekly games. I think the success is based on many factors. First and foremost a group of players interested and committed in the game.

Secondly preparation and I’m not talking about the weekly kind, but campaign prep. I did a survey to gather information on just what the players were interested and not interested in to use as a guide when preparing the campaign and possible adventures. Discussed their characters, went over expectations, so we all started knowing what to expect.

But you know what they say about best laid plans. As it is inevitable the plan has needed revisions. Players have changed characters, despite discussing expectations they were varied and sometimes contradictory and trying to mesh them all has not always been successful. Overall I think we have stuck to it and every so often there is something of interest to everyone. As will al role playing games not every session an highlight all the different plots for every character but there should be something for everyone to do.

There have been complications, not everyone understands the Mutants & Masterminds 3rd edition system. Some players like the crunch, others are lost in the options, but as a group we all pitch in and make it work. I as a GM have found the system flexible enough to allow me to improvise and guesstimate when necessary and varied enough to meet my needs when I need more detailed write ups.

As with everything different opinions on just what a “superhero” game IS, is perhaps the biggest hurdle. Some people think supers are only four-color bigger than life adventures; others prefer grittier more down to earth types of adventures. We try to meet at a happy medium most of the time, but its and ongoing struggle. I ask my players what they thought of the game every session. I have said it before, you need to steel yourself to get the good and the bad and take it in, digest it and use the comments to improve the game.

Overall what have I learned to make running a superhero game easier?

Have I applied them all? Most to a certain degree… I think number 4 may be the biggest point of contention, but we are learning and adapting. As always communication is king. Talk to your players and listen to what they have to say. After all this is a game you ALL should enjoy. Looking at that list this is advice I have gone over before and that will apply to any game, just that it may be particularly important for a successful supers game.

Will this game become my mainstay campaign? I don’t think so… As much as I love supers, my first and true love is fantasy and I can’t resist her siren call forever! I am itching to return to our Pathfinder game, this may be some months away but I am eventually running it again. Then there is the sci-fi game I keep mulling about in different posts. But I have loved this supers game and I want to publicly thank my players for sticking to it though the good and the bad.

Do you have any other advice for running a superhero game? I’d sure like to know…