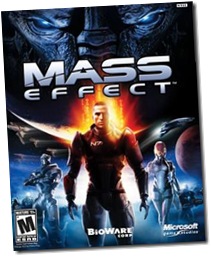 I finally made a breakthrough in my efforts to get a Mass Effect campaign using Starblazer Adventures up and running. The biggest hurdle so far have been the biotic abilities and tech talents. But luckily I’ve found solutions for both.

Tech is actually pretty easy. In most cases no special skills or stunts are needed. Starblazer’s Science and Engineering skills and their respective stunts pretty much cover everyting needed. The Omni-Tool from Mass Effect basically combines the Med Kit, the Multi-Tool and a PDA in one single item. In addition to that usage of the Omni-Tool shall allow the user to administer medical treatment with either their Engineering or Science skill whatever is higher.

With the help of Legends of Anglerre I was able to create a couple stunts for the new Biotics skill. In order to pick that skill the character needs at least one fitting Aspect. The stunts then give access to the powers you might know from Mass Effect 1.

Here’s what I’ve come up with:

You can use Biotics to throw or knockback an item or character. See the knockback rules on p. 225 and the weight factor table on p. 126 for details. Human-sized characters have a WF of 2.

You can use Biotics to block or defend against physical attacks.

Requires Barrier
For a Fate point, you can protect a target with a high-gravity mass effect field. This armor has a pool of points (1 per shift) which are used up by incoming Physical stress damage.

Requires Throw
For a Fate point, you can use Biotics to lift another person into the air. It gets a temporary aspect like “Floating helplessly” and its WF is reduced for -1 until the end of the effect. See the Might Lifting Table on p. 126 for details.

You can use Biotics to attack a character.

Requires Warp
For a Fate point, you can make a Warp attack against an armoured target inflicting a consequence on the armour instead of stress.

You can use Biotics to put a character in stasis. The affected character is impervious to damage but cannot act for the duration of the effect. The effect lasts for one exchange. For each spin it last for an additional exchange.

Requires Throw or Warp
For a Fate point, you can pull multiple enemies to a single area, leaving them floating helplessly and vulnerable to attack. They get a temporary aspect like “Floating helplessly”.

These stunts should work well enough in most cases. If additional detail is needed, I might add more stunts later that represent the various Biotic amplifiers, the biotic affinity of the Asari species or improved omni-tools. But for now I think it’s a good start.