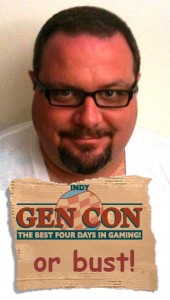 I am really looking forward to Gen Con! I blogged about it a while ago… We are so close to that most sacred gathering of geeks in Indianapolis that I can taste it. I’ve only been there once before in 2007 but I can tell you it’s one of those things you have to do at least once if you are a gamer. Last time I think I missed a lot of the fun, I bought too much, gamed too little and did not interact with people enough. All issues I intend to correct.

I also plan to cover Gen Con for the blog. The how is still taking form. I’ll be taking lots of pictures and talking to whoever will indulge me, to know what fun things publishers big and small are planning and unveiling at the con. In this day and age there is so much information and coverage (like the fine folk at This Just in from Gen Con) that I don’t aspire to bring you every bit of news, just what I think will be of interest to our readers. I hope to post in some form from Gen Con, let’s see if the Exhibit Hall and random games don’t kill me…

What’s my plan? Well it’s fluid… At first I began filling up a log schedule and after a while I realized I would be running from one place to the other with little time to just ENJOY being there. So I scrapped it and decided to play it by ear. Here is the (very) rough outline:

There are some things I’m looking forward, like getting my Savage Worlds Deluxe copy, trying to get a copy of Ultimate Combat, getting a copy of e20, even if it’s an electronic one. I am even bringing some gifts a friend sent to some of his friends who will be exhibitors. I also plan to bring some rum and a coffee for a Puerto Rican who misses his Yaucono. I also plan to meet the #RPGchat crew at one of their planned meet ups. Good times ahead…

If you are going to Gen Con I’d love to meet you and chat. You can find me in Twitter as @Sunglar, on Facebook as sunglar@hotmail.com, Google+ as sunglar@gmail.com. Be sure to reach out if you feel like taking for a bit and saying hi! If all goes to according to plan I’ll be there very soon…

The biggest hurdles to my plan so far? Well they start at home! I had a video camera for the convention and found out last night the battery is not working properly so I am scrambling to get a replacement. If I manage to you may see some video, if not, well it’s all going be still pictures. Second, well its nature! A tropical storm, that may or may not become a hurricane, is on its way to Puerto Rico. Who knows what could happen… I just hope it doesn’t play havoc with plane schedules and I manage to arrive in Indianapolis as planned. See you there!

PS – If you see the gamer on the pictures at Gen Con, be sure to throw him a bone!