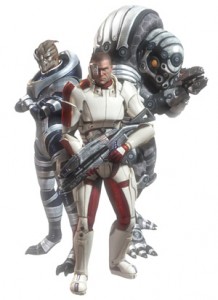 Yesterday my new gaming group assembled for our Starblazer Adventures character creation. None of us had played FATE before, so it was an exciting experiment for all of us. As expected coming up with the Aspects was actually the hardest part.

After all the players had finally arrived I gave them another overview of the FATE system. Then after talking about their basic character concepts we started with the character creation phases.

To make things easier for all of us and because I thought it was the best fit for what I had in mind, I chose the Gritty option. That means there are three phases during character creation (Training, Starblazer Legend, Guest Star). Each player character gets 6 Aspects, 3 Stunts and can spend 15 Skillpoints. Choosing skills and stunts took mere minutes, but going through the three phases to come up with a backgound story and the six Aspects took several hours. Luckily my players have brought some snacks and I had prepared some Chili con carne, so at least we didn’t starve through the process. 😉

But in the end the players came up with some great Aspects. I am not sure how well they will work ingame, but at least they sound great and give a good overview of how the character “ticks”.

So what characters did the players create? There is the female corporate pilot whose father had already worked for ExoGeni and who is known for her reckless flying, the ambitioned Turian tech who has issues with authority, the genius archeologist who considers his brains his only weapon and finally the Drell ex-soldier who had to survive as an orphan in the streets of his homeworld.

Hopefully we can play for the first time in two or three weeks. Alas scheduling is as always a major issue and two of the players have to drive about an hour to get to my home. But this is not keeping us from giving Starblazer Adventures a try. As said before we are all quite excited. We all enjoy the Mass Effect universe and everyone is very happy with how the characters turned out. Now I have some time to prepare our first adventure. Wish me luck.