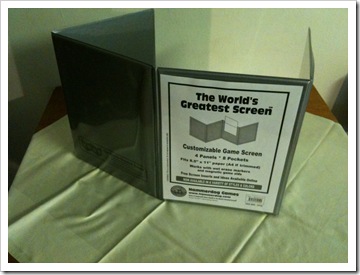 Recently I was looking for another customizable GM screen. While I was quite happy with the “Savage Worlds Customizable GM Screen” for a while, I thought it wouldn’t hurt to look if there was a slightly larger one out there. One of the problems I had with the screen I already owned was that I had to create the insert myself. Because of the landscape format I couldn’t just use pages copied from the rulebook. And there have been cases when I wished the GM screen was a bit higher.

The World’s Greatest Screen actually solves these issues. Like the SW Customizable GM Screen it’s created from cardboard and vinyl. It has a total of 8 sleeves sized 8.5” x 11” so even A4 paper fits if slightly trimmed. Please not that I picked the portrait variant, but if you prefer landscape, you can get it, too. There’s also a mini version with 4” x 6” sleeves.

Quality-wise the World’s Greatest Screen is on par with the Savage Worlds Customizable GM Screen. It looks sturdy enough to survive years of adventuring. With a price of $29.95 it should be affordable for every gamemaster.

According to the product description you can write on the screen itself using wet erase markers. I haven’t tried that yet, but I think this could come in quite handy. If you are looking for a sturdy, affordable and customizable GM screen, you should consider getting “The World’s Greatest Screen” by Hammerdog Games.