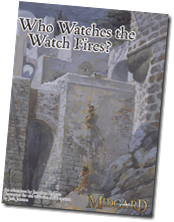 I am truly amazed how much third-party support Green Ronin’s AGE system has been getting lately. There are of course numerous fan supplements, adventures and conversions on the ‘net, but a good portion of support has come from our good friends at Open Design LLC.

The upcoming Midgard Campaign setting will come with full support for that game system, Kobold Quarterly regularly has interesting articles for fans of the system and they recently released a Midgard Bestiary for AGE.

They latest release is “Who Watches the Watch Fires”, a complete free adventure for beginning characters written by Jonathan Roberts and converted to the AGE system by Josh Jarman.

The watch fires of Friula warn against invaders, because Friula’s small army relies on the surrounding badlands to defend the city and its sparse farmland. Any attackers must cross treacherous hills and travel a road rife with blind gullies and steep canyons. Even a modest force can bleed aggressors white long before they reach the city gates—but only with enough warning.

A line of watch fires stands along the southern road to Starlight Keep and the Sticks of Trombei. At the first sign of an invasion, the guards light the fires, the city locks its gates, and the banners of Friula ride out to thwart the invading army.

But now, the watchfire keep has been taken by treachery, and your heroes discover the betrayal by chance. Can your heroes retake it in time—and light the watch fires?

You can download this free adventure for the AGE system set into the Midgard campaign setting at the KQ online store. A D&D 4th Edition version appeared in KQ #18.