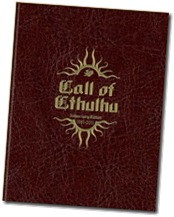 When Chaosium announced the 30th anniversary edition of Call of Cthulhu I wasn’t actually that thrilled. Sure it looked nice enough, but I already owned the German Edition of the book. But over the last months I picked up several CoC supplements from DriveThruRPG in English language and I found it quite awkward to have the core rules in a different  language than the supplements. Eventually I got the PDF version of the original corebook, but I still wanted a proper printed book as well.

So a couple of days I decided to get an English-language version of that fine game. And since the 30th anniversary edition was available at my favorite German online shop Sphärenmeisters Spiele I decided to order it after all. And I have to admit I don’t regret buying it.

It’s a very good looking, leather-bound book with 320 pages printed on very heavy paper. The interior looks almost exactly like the German edition from Pegasus Spiele (Pegasus Spiele was actually credited for this), which was always far superior to the Chaosium original.

Here are some photos I took with my webcam after unpacking the book yesterday:

If you plan to get a copy of Call of Cthulhu any time soon, I recommend either picking up the latest German edition by Pegasus Spiele (which actually comes in two books) or the 30th Anniversary Edition.