The City and Tavern Generator each create a pretty detailed description of a complete city and a tavern respectively. You just press a button and a new randomly generated description is generated, there are no setting to be made. But the software allows you to edit your results and save it to a RTF file. Following are examples of the output generated by the City and Tavern Generators:

Miyl is a city with loud streets.

Its people take pride in their beautiful ancient architecture, patriotism, superstitions, monks, enchanters and local fighting schools. Their patron deity is the God of Names.

Some current rumors:
Kakil the butcher is being unusually quiet.
Chaemn the servant believes that Troumner the bandit is involved in business dealings with Isairakri the shepherd.
Criv the assassin claims to have proof that Elath the moneylender’s father is planning something.
Tramnax the gambler’s father is waiting in the tavern.
Jatimo the moneylender is going to run off with Nykur the guide’s daughter.

Noteable patrons: the amourous drunken druid wearing a religious symbol and the drunkenly ranting bard who clearly has a bodyguard

House special: Semi-transparent blue with blue flecks and a stick of cinnamon in the mug. The drink smells heavenly and tastes like ginger. It can be smelled on a drinker’s breath for several hours. 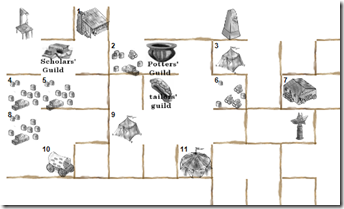 The Feature Namer, Crowd, Rumor and Merchant Generators let you choose the number of results you want to have generated. In addition to that you can choose what type of Feature or Merchant you want to be generated. The Merchant Generator also allows you to exclude sellers of magical items by checking the “Historical” check box. I especially like the Rumor generator which can also be used to generate adventure hooks if you have trouble coming up with ideas of your own.

In my opinion the Market Map Generator is the highlight of the pack. It generates a beautiful map of a market place including descriptions of all the market stalls and buildings. The generator gives the user a plethora of options. You can change the scale of the map, choose which types of merchants and other structures you want to include. You can also choose between four different background decorations (blank, parchment, cobbles and grass). The map can be saved as PNG file.

The software has been written in .NET and should run fine on Windows XP or newer. The City Builder sets you back mere $3.95 and comes with a 30-day money back guarantee. But I doubt this guarantee is actually needed. It’s a great piece of software for a very reasonable price. If you like random generators you should definitely get a copy of the City Builder Generator Pack!