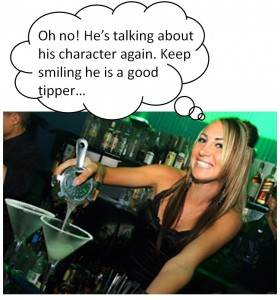 I am not a closet gamer! By that I mean I do not hide my love for role-playing games. If you follow me on Facebook or Twitter you know I regularly post about RPGs and other assorted geek interests. I actively support my local gaming community as much as I can. Heck I blog about it!

People around me know about role-playing. Coworkers and acquaintances know that I play “the game” on Tuesdays and know about the “geek picnics” I get involved in periodically. I talk about RPGs to my non-gaming friends (which there are not many of since most of my friends actively game or have gamed with me at some point in their life) when they ask about it. I am not pushy and try not to force my hobby on the uninterested.

However this past Friday something odd happened to me. I was out with my girlfriend’s sister celebrating her birthday, as the night progressed I had consumed a pitcher of sangria, various screwdrivers, I was chilling to the music when someone asked me, “What is this game you play and you keep writing about on Facebook?”

I was not ready for this question. I held my drink and look flabbergasted for a moment. As I was speechless they proceeded to discuss what they thought the game was. Obviously they had talked about this. They had no idea what the game was; someone thought it was something like Second Life (which admittedly I know little about), some sort of online game where I had an avatar.

I regained my composure and attempted to explain what the role-playing games I played were. I told them it was not a computer game, that it was a social activity where people got together to tell a story. They asked about the maps and miniatures and I told them we did not use them all the time, that we used them only during conflict or situations where the specific location of participants was important. I also explained that the game was somewhat like playing cops and robbers when we were kids and that dice were used solve conflict and avoid discussions like the ones we had when we were kids… “I shoot you!” “No I shot you first!”

They seemed genuinely interested, and thought it was much cooler than they had originally conceived. Someone actually asked me to invite her to the next geeknic, she wants to experience what RPGs are firsthand. I am happy with the outcome. However I know I was not as eloquent as I could have been. Alcohol had something to do, but the unexpectedness of the situation caught me off guard.

So I ask you, when someone asks what a role-playing game is, what do you say? What is your short description, your elevator pitch? Just in case I get caught unaware again…