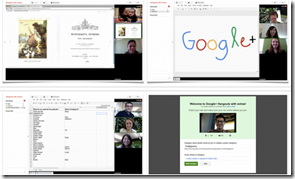 Yesterday I joined Chris McDowall and a group of three players I didn’t know before that in a game of “Into the Odd” over Google+ Hangout. In this post I want to talk a little bit about both. Let’s start with “Into the Odd”.

“Into the Odd” is basically a highly streamlined and simplified version of D&D that did away with classes, three of the attributes and includes a totally new magic system. In this game magic is not fully understood and based on artifacts left behind by some race that supposedly came from the stars. While it’s a fantasy games it brings a lot of horror and SF themes to the table. The focus of the game is exploration and in our game we explored the “Iron Coral”.

I don’t want to spoil things here, because you might want to join Chris one day or eventually your local GM will pick the game up when it’s done and run it for you. But rest assured there was a lot of exploration to be done and it was very exciting and weird. I loved it. I can’t wait to join the guys for the next session sometime next week.

What I also enjoyed very much is that the “Into the Odd” rules usually only call for dice rolls when you are in trouble. You can do pretty much everything without rolling, but when the GM asks you to roll it’s usually because you need to evade damage or during combat. “Into the Odd” feels quite deadly and we were extremely cautious. In the end the whole party safely escaped from the Iron Coral but one player was down to just 1 hp. Ouch!

If you want to learn more about “Into the Odd” check out Chris’ blog and his playtest document.

Now let’s focus on Google+ Hangout. Google+ is the new social network by Google. Think of Facebook with a better UI, better privacy options, and a freakingly awesome video conferencing feature called Hangout. Recently Google added a few extras to Hangout that are almost perfectly suited for online gaming. Basic Hangout allows you to see each other (if everyone has a webcam) and to use voice chat. In addition to that there’s a text chat and you can watch YouTube videos together.

If you decide to use “Hangout with Extras” you don’t get the YouTube feature BUT you can share your desktop, Google Docs documents or a Sketchpad with each other. The latter is great for drawing maps and we always had a document open with our character stats. Very handy indeed!

We had some minor audio issues, but overall the experience was great. After a few minutes you almost forgot that you were sitting in front of your PC with the other players scattered across the globe. For me it felt almost like sitting with friends around the table.

By the way, one of the other players, David Reichgeld posted about his experience on Google+. His post is public, so you should be able to check it out here.