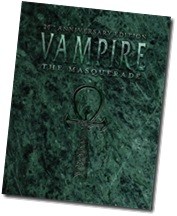 I was actually a bit surprised when I noticed that the 20th Anniversary Edition of Vampire: The Masquerade was already available for purchase on DriveThruRPG. I haven’t actually expected it before late October. There will also be a print-on-demand version over DriveThruRPG later this year, so if you want to get this, you may want to wait a bit longer.

So what’s the big deal with V20? It contains all thirteen Clans, Clan variants and bloodlines from the oWoD, the rules have been slightly updated and there are rules for characters from Neonate to Methusaleh. All disciplines from level one through nine are included and the setting has been updated to reflect the modern times.

While I own all the nWoD core books, I have to admit I still prefer the oWoD setting. Back in the day I’ve played everything from a Caitiff vampire to a Stargazer Philodox in Werewolf. Both Vampire: The Masquerade and Werewolf: The Apocalypse are games I would love to play (or run) again. As far as I know White Wolf plans to rerelease Mage and Werewolf in anniversary editions, too, so perhaps I might get my chance.

The price of $29.99 is a bit above what I usually pay for PDFs and I wouldn’t mind getting the POD version, so I might wait until the holiday season before getting my copy, but from what I’ve read so far the 529-paged PDF is worth every penny.