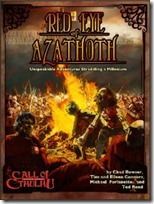 Open Design LLC recently released The Red Eye of Azatoth a 108-paged adventure anthology for Call of Cthulhu available through the KQ Store or DriveThruRPG. Its story spans nothing less than a whole millennium. Each adventure takes place in a different place and time from England in 887 AD to the American West in 1887. The name of the adventure anthology refers to the Harbinger Star, a comet that appears in the sky on the 87th year of every century. This comet is what binds the different adventures together.

Fear the Red Eye of Azathoth!

Kings die, nations crumble, and madness trails in the fiery wake of a comet called The Red Eye of Azathoth. Do you have what it takes to battle across history against the Mythos horrors that surface under its lurid glow?

Ia! Ia! Take your players to the mad reaches of our past with 108 pages of epic horror, complete with player handouts, new adversaries, and pregenerated Investigators for each time period.

Physically the adventure looks great (even in PDF form). There’s a nice page background that give the pages a slightly old feel without being distracting. The interior artwork and the maps are mostly in black & white but of great quality. That’s how I want my historical Call of Cthulhu adventures to look like.

Each adventure contains an appendix with pregenerated investigators for the era the adventure is set in. This is extremely helpful since the core CoC rules don’t cover the historical eras the campaign is set in. There are four pregenerated characters per adventure and there are some guidelines that should help you if you want to come up with your own investigators. Some of the adventures also introduce new skills, new spells and monsters that the GM can also use in adventures of his or her own design.

A big plus of the adventure anthology are the included handouts. Just print and cut out the handout before play and you’re ready to go. Especially the Investigator Handouts are very handy. They give the players information about who their investigators are, what they know, and what their goals and perspective are. Because of the focused nature of the adventures you need certain guidelines on how you’re supposed to play the investigators. Some players might find that restricting but I actually like it. If the players embrace the guidelines instead of fighting them it makes things much easier for them and the GM.

The Red Eye of Azatoth’s biggest strength is also its only weakness. Since the five adventures are set into different lands and eras the players can’t use the same characters through all five adventures. The campaign is tied together by the plot and by the underlying theme and not by the player characters. While this opens interesting opportunities it may turn off some players. And since the CoC core rules don’t support playing in the eras used in the campaign out of the box the GM might have to do some additional prep work if the players decide not to use the pregenerated investigators.

So why should you pick up The Red Eye of Azatoth? If you like historical CoC adventures you’ll not be disappointed. Each adventure is detailed enough that you can pretty much run it out of the box without additional prep work if you rely on the pregenerated investigators for each era. The handouts, maps, and artwork are well-made and should make the job of the GM much easier. Overall you get a story that spans the ages but if you wish you can run each adventure separately.

The 108-paged PDF sets you back $9.99, which is a fair price in my opinion. As far as I know the printed version was available to patrons only, but the PDF is now available for everyone through the KQ Store or DriveThruRPG. I think I found the adventure I am going to use for my New Year’s Eve game!

P.S.: Thanks to Shelly Baur for providing me with a review copy of that fine adventure!

Why I Love Kevin Crawford’s Games