When I reviewed the Advanced Feats series from Open Design I wished they would give the Advanced Feats treatment to the core classes in the Pathfinder RPG. Well ask and you shall receive! (Does that mean I now have to worship at the Kobold altar? Never mind, back to the post…)

Wait, that’s not really true. The Kobolds have created a new series that covers some of the Pathfinder core classes, but they are much more than the Advanced Feats series. I understand why they did it. When the classes from the Advanced Players Guide came out there was a dearth of Feats specifically designed for the classes, a vacuum very aptly filled by the Advanced Feats books. For the core classes however, the situation is very different.  There are lots of Feats for these classes, they needed to up the ante, and they did!

The Divine Favor series covers the divine classes, old and new, Cleric, Druid, Paladin, Oracle and eventually the Inquisitor (it’s just not out yet!), providing an overview of the class, optional rules, abilities, feats and spells. These are some great resources that embrace the innovations in the system, such as sub-domains and archetypes, I must say I am really impressed by the four I reviewed.

Divine Favor the Cleric: The cleric was the first class I read when I opened the rulebook for the D&D Basic Set. The cleric is such a mainstay of fantasy role-playing games that I just had to read this first. If we go by first impressions, the cover blew me away. The art by Cristophe Swal, who painted all my favorite Advanced Feats covers by the way, is not the type one associates with the cleric. It looks more like a barbarian, and I like that, it goes against the stereotype, and I like that as the opening salvo to this book.

Its 20 pages long, take away the cover and the OGL license and you have 18 pages of gaming goodies. The layout is clean and functional, using stock art somewhat effectively. I wasn’t thrilled by all of it. Too much in some cases, I must admit to liking the layout of the later books in the Advanced Feats series better. Maybe if a few pieces had been taken out the book might have been shorter but that’s ok. But this really did not detract from my liking of this book.

As with all the other books in this series, it opens with an overview of the class. Short to the point, but it brings up some interesting points that challenge the “stereotypical” view of the walking first aid kit. Sorry I meant cleric. The domains and sub-domains are next. They cover some interesting areas not in the books, like prophecy, apocalypse, alchemy, which ties nicely to the new alchemist class. I love the sub-domains as options, but I like complex deities with different sects and followers, so they arer ideal for me. Depending on your campaign your mileage may vary.

My favorite part of the book was the Archetypes. These variants clerics fill some interesting niches for the cleric role. Their tweaks and variations on the standard cleric’s abilities evoke their different nature without making it a whole new class. Some may be more immediately attractive to players than others, some will make great NPCs, but I never discount a creative player picking them up. The cleric’s Divine Favor book finishes up with variant channeling and spells which complement the domains and sub-domains earlier in the book. 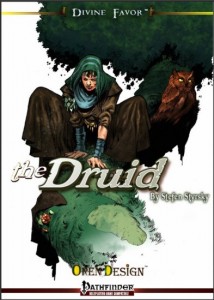 Divine Favor the Druid: Unlike the cleric, I’ve never felt particularly close to the druid. I have never played one, one had one player run one in all the years I’ve GMed and looking back I realize a preponderance of druids in my games have been villains. That must be rectified, but I digress.

The cover of this book is also by Cristophe Swal, and I like it, just not as much as the one for the cleric. The book is 19 pages with the cover and OGL license. It suffers from the over preponderance of stock art just like the last book, but that’s just a minor problem on an awesome book. After the mandatory and insightful overview of the class there are options for the wild shape ability, like turning into a group of creatures, even a swarm, abilities for animal companions and then come the archetypes. Again my favorite section, I particularly enjoyed the elemental themed druid archetypes.

There are new domains and sub-domains, some rather specialized. I can see creating NPCs that use them, but players with very specific visions of their characters might find the bird or insect domain useful. The new animal companions, which can be used by rangers as well, are a mixed bag. Brain ooze, really? The book closes with a few feats which are nice.

While I may seem a little hard on the book it really is because I really enjoyed it. I wished it was longer. All I can say is that the options in this book made me want to play a druid, that’s high praise. 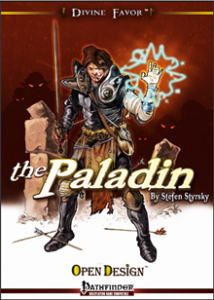 Divine Favor the Paladin: And here we are! My favorite D&D, and now Pathfinder, class. My longest running PCs, the one named after my nick of Sunglar, was a Paladin built using the AD&D 1st edition Unearthed Arcana rules. This is the Divine Favor book I was looking forward to the most. I was not disappointed, if anything I wanted more, 20 pages was not enough.

While the cover is also by Swal, it was my least favorite of the four. However the stock art I didn’t mind so much, I like the selection better, or maybe it’s simply that there is more art for the martially themed Paladin than for the other divine classes in these four books.

The alternate class abilities are different enough that they give them a new feel, specifically the idea of stigmata as a way for a deity to punish a paladin that has strayed from the true path. In my experience this aspect of a Paladin that some people dislike but I always see it as a great rpg opportunity. The Paladin vows that demand certain behavior but grant some boon to the Paladin were all excellent. The archetypes and feats were also good, but I enjoyed the other elements much more.

Divine Favor the Oracle: This last book I read from the series is the only one that’s not a core class. Introduced in the Advanced Player’s Guide the Oracle is a mysterious divine class with lots of interesting role-playing potential. The class was well examined in the Visions of the Oracle so there is no overview here; they go right into the goods!

The new curses are very interesting. I particularly liked the Echo curse, under which you can only speak what has been spoken to you. This could be a lot of fun. There are many new mysteries and how can you go wrong when the book has a mystery for wine? A small list of feats closes the book, they work with the rules in the book and all seem very useful. I really liked the cover and layout in this book, my favorite of the four.

These books are all $3.99 in PDF and available at the Kobold Quarterly store. Click on the link for the tile of each book in this post to go to the page for each book. Stefen Styrsky and Wolfgang Baur did a great job in the four initial outings of the Divine Favor series. I’m looking forward to the Inquisitor’s. Also hope to see an arcane themed series, maybe a martial one as well… Oh the possibilities!

Let me close by thanking the people at Open Design for sending us digital copies for review. They make this Pathfinder fan a happy little blogger. Here is wishing you and all much continued success.