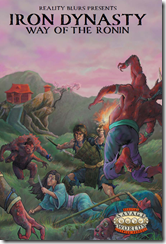 As a follow-up to yesterday’s interview with Sean Preston I want to present to you Kurt Wiegel’s video reviews of Reality Blurs’ games RunePunk and Iron Dynasty.

By the way, Sean, what did you do to Kurt that made him be afraid of you?