A while back a gentleman by the name of Jose Muñoz contacted me on behalf of a Spanish group of roleplayers called Arcano XIII that was interested in translating Warrior, Rogue & Mage into Spanish. Since I released WR&M under a Creative Commons license they of course didn’t need my permission, but I think it was a nice gesture and they even keep me up-to-date about the translation process.

A couple of days ago they sent me a layout example and I have to admit it looks very nice. Check it out: 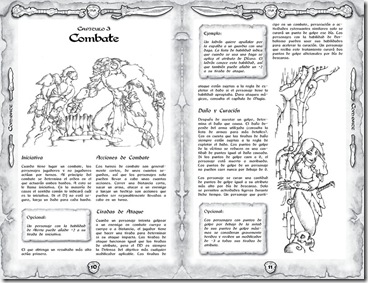 The final PDF version is not done yet, but I’ll let you know as soon as it’s out. I feel honored that people actually find my little game interesting enough to do the hard work of translating it into another language. By the way, the Spanish version is not the only translation of WR&M currently in the works. As far as I know there are currently people working on a German and a Hebrew translation of WR&M. I can’t wait to see them released as well!