One of my goals for 2012 was to play more often and until now things are looking good. At the end of the month I’ll start a new campaign using Rogue Games’ Shadow, Sword and Spell. I’ve been planning to run SS&S for quite a while now.

I made first contact with this fine game back in 2010. When I was at Gen Con, Richard Iorio II offered to run a game for us. Alas Richard got quite sick and was unable to run a game, so Zachary Houghton prepared the game in just 45 mins. We created our characters at the Red Dragon Inn with Felicia Day and Wil Wheaton having dinner at the table next to us.

I quickly fell in love with the game. It’s a sword & sorcery roleplaying game inspired by the works of Robert E. Howard and H.P. Lovecraft among others. In my opinion SS&S is even more lightweight than the Rogue Games games, which makes it a perfect entry into the 12° system. And the human-centric, low-magic sword & sorcery genre is a welcome change to the classic high-fantasy genre that seems to dominate our hobby right now. If I had to pick my favorite game from Rogue Games’ portfolio, it would definitely be SS&S. It’s a real gem.

After wrapping up our Call of Cthulhu game recently, my players asked me to run something with more action and less investigative elements. We actually pondered whether we should play Dungeonslayers again, but then I told them about SS&S. They agreed to give it a chance and so I started working on a campaign that I can run starting next week. 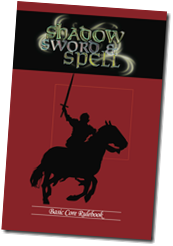 Instead of running a regular plot-based campaign I’ll try to run a sandbox game instead. That’s something I actually haven’t done before. Even though I often had sandbox elements in my games I always had a plot in mind. This time I want to fully embrace the sandbox.

I could have used the setting included in the SS&S Basic Core Rulebook for this, but instead I am currently working on a setting on my own. The campaign will be set into the outskirts of a vast empire that is loosely modeled after the Roman Empire in it’s later, more decadent days. The power of the empire has been waning for a while now. Old enemies are slowly gathering strength and plan to take back what the empire has occupied centuries ago. Of course there are secrets, ruins, treasures, bandits and monsters everywhere. These are troubled times, a perfect opportunity for adventurers.

When everything goes according to plan we’ll create characters on the last weekend of the month. After I know the characters motivations and background I can add the relevant details to the world. Instead of planning everything beforehand (which would be a huge task) I decided to make up stuff as we go along. When the players tell me they want to take over the local thieves guild, then I will prepare along those lines. If they want to join a mercenary company, I’ll develop things into a different direction.

While I actually have a pretty good idea what the setting should look like, I am still without a proper map. But for the moment a simple sketch map will do. As soon as I come up with something, I’ll share it with you here.

This post is part of Gnome Stew’s “New Year, New Game” blog carnival. Check out this site for details.

IN MY TRAVELLER UNIVERSE … Part 2