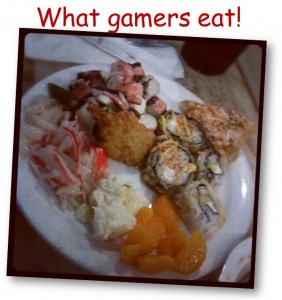 Recently I sat down for dinner with friends at the Golden Place Buffet in Guaynabo. They happen to be gamers, most of them being the regular players in my campaign. There were a couple of other friends, the girlfriend of one of my player, another gamer friend, and the non-gamer looking flabbergasted at all this, my girlfriend.

See, I’ve had a couple of rough weeks and we had to cancel our weekly game twice (sacrilege I know!), so we planned this as a way to catch up, see each other and spend some quality time together. Needless to say at dinner with gamers I had to bring up the topic everyone’s been talking about in recent days D&D Next/5th edition…

I wanted to get their take on the news of the development of a fresh version of Dungeons & Dragons. Here in the blog we recently posted our thoughts, but we are bloggers, keep abreast of news and interact with a different community of gamers than some of the gamers I was sitting with. The reaction was interesting, mostly predictable if you know the group, but telling considering this quote from Monte Cook:

“I’m the lead designer of a project that will likely evolve into a new iteration of the Dungeons & Dragons ruleset. It’s meant to be a set of rules that unites all the previous editions, and the players of those editions.  It’s a big project, and we plan on involving all comers to playtest and voice their opinions, because really, what’s the point of designing a game no one wants to play? And who knows better what D&D players want than, well, D&D players.”

(Thanks to EN World for collecting this and other quotes and information on the development in their D&D 5th edition info page!)

What did they say? Read on…

This is a varied group, running the gamut from their mid-twenties to forties, all longtime role-players and as a whole we’ve all played D&D, some of us more than others, but we all cut our teeth on the game. Some of them have played at my table for nineteen years, and for the longest time all I ran was D&D. Many where there when we switched from AD&D 2nd edition to 3rd edition, and later when I dragged them (some kicking and screaming) to D&D 4th edition, some even ran the game, so we’ve all experienced edition change.

In the midst of a conversation about movies, critical hits and the selection in the buffet I dropped the bomb, “So what do you think about the fact they are developing a new edition of D&D?” My favorite response was, “What?” There was actually someone at the table who had no idea. It’s been days since the announcement, this is not a person who lives under a rock, he uses the internet, but obviously despite WotC’s attempts and all the media coverage this was the first he had heard of it. 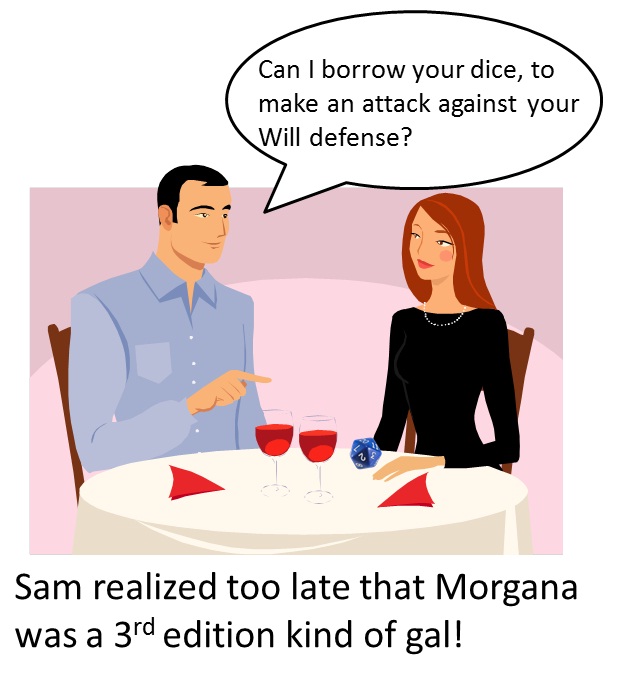 The general consensus seemed to be disinterest. One of the most vocal haters of D&D 4th edition in my group actually threatened to hit me with the book if I “wasted” (that’s what he called it) my money on a new edition. More moderate voices insisted they were happy with the fantasy RPG they have, Pathfinder, and that it would have to be a pretty amazing system to get them to go back to D&D.

When someone pointed out that planning for sessions is an intense experience for a Game Master, I made the faux pas of actually defending 4th edition and singing its praises, such as ease of prep time for Game Masters, and the GMs around the table insisted they have the same ease of prep with Pathfinder. And while I agree Pathfinder made many strides in these regards, and making it easy when creating NPCs, specifically by providing short cuts and samples of them, I believe there are still some issues with high-level play, but nothing that bothers me. I can navigate this hurdles and I think the other GMs at the table have mastered the system and thus feel very comfortable with the game.

I think this may be the biggest obstacle Wizards of the Coast faces when they try to attract lapse players back to the fold, they feel that when WotC published 4th edition they were left behind (no pun intended!) and that they have moved on, they have found other games that fit their style. Another of my players never played 4th edition and did not understand the vitriolic reaction against D&D 4th edition, but also felt Pathfinder fulfilled her needs for fantasy gaming and has no desire to change systems.

The most surprising reaction came from one of my oldest friends, he works at a FLGS and is the only player at my table who still actively plays D&D 4th edition (albeit not with us). He said he has NO interest in a new game, that he would continue playing D&D 4th edition and Pathfinder. He distrusts (I don’t recall his word choice exactly, but this was the impression I got) WotC’s corporate policies and had little hope on what they plan to do, he was also underwhelmed by the design team. He admitted he was excited about 4th edition, not so this time around.

I remain positively optimistic. I want to see where this goes, look forward to the open play test, which I believe is a step in the right direction, and think the stated design goals are laudable. From this conversation I know there is NO interest among my players to playtest the game. Since writing the last post on the subject I’ve decided I DO want to play the game as part of the playtest and know people who are interested, so I hope I can cajole some members of Puerto Rico Role Players to try this out.

All this is anecdotal; still I wonder how much of this type of attitude is out there… Is it too late? Has the ship sailed? I certainly hope not. I want to see what the next version of D&D is all about, I want the granddaddy of games to thrive, whether I end up playing it or not. So I invite you dear reader to keep an open mind, I really think it’s too early to say what the game will be like. Don’t write it off, if it ends up not being what you want to play, other will. Let’s all be more tolerant of what other people want to play, we are all gamers, no matter under which system we roll our dice! It’s those diceless heathens we need to worry about! I’m joking, no hate mail please…

I apologize in advance if I misinterpreted or misquoted anyone on this post, know that these are my interpretations of the opinions I heard. Thanks Enith, José F, Luis A, Fernan, Luis L, Pierre, Sara, José D and Nilda for a wonderful evening!

PS- Yes, we are going back to out regularly scheduled Tuesday game this week, there is nothing to fear!